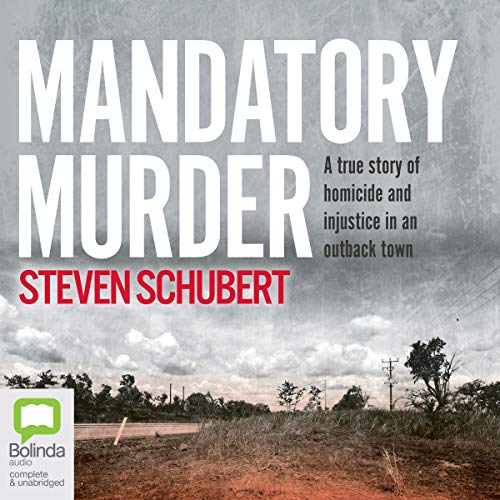 By: Steven Schubert
Narrated by: David Tredinnick
Try for $0.00

A compelling true story of homicide and injustice in an outback town.

At first it looked like a swag, said the grader driver who found the body just off the road outside the outback town of Katherine. Police identify the dead man as Ray Nicefero, who'd recently appeared in court for aggravated assault and breaching a domestic violence order.

Three days later, the constabulary rounds up three young local suspects: Christopher Malyschko, 24, Darren 'Spider' Halfpenny, 22, and 19-year-old Zak Grieve, who happens to be Indigenous. A month later, Bronwyn Buttery, Ray's former partner and Christopher's mother, is arrested. Eventually Darren Halfpenny agrees to testify against his co-accused. But when the accused face court in the rough justice system of the Northern Territory, it soon becomes apparent there are few certain, provable facts to be had. Depending on who's talking, a loving friend can become an abusive monster, a battered wife a conniving temptress. And a joke between mates about the best way to dispose of a body becomes a conspiracy to murder.

The outcome of the case is no less murky, thanks to the NT's mandatory sentencing laws, which, the judge says himself, 'brings about injustice'. What is indisputable is that the only man that the judge believed to have not been at the scene of the crime receives the longest sentence.

Mandatory Murder is the compelling true story of a murder in an outback town in 21st-century Australia and the extraordinary aftermath.

Author Steven Schubert was living in Katherine when the murder took place, and his account is rich with the kind of detail only an eyewitness can provide. The book raises important questions, including how a man who didn't attend a murder can go to jail for 20 years.

What listeners say about Mandatory Murder

not sure why I listened to this murder story