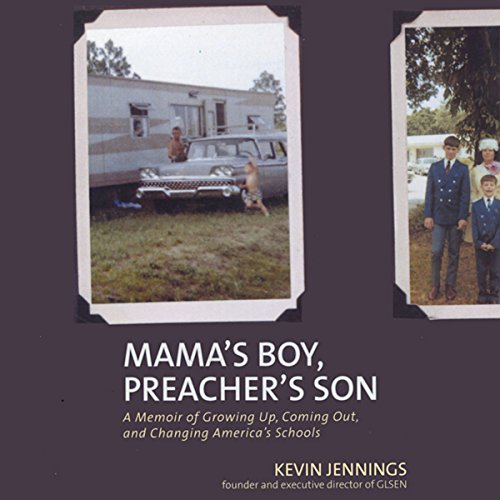 By: Kevin Jennings
Narrated by: Ethan Sawyer
Try for $0.00

Long before Kevin Jennings began advocating to end anti-LGBT bias in schools, he was a victim of it. In Mama's Boy, Preacher's Son, Jennings traces the roots of his activism to his elementary school days in the conservative South, where "faggot" became more familiar to him than his own name. Mama's Boy, Preacher's Son is that rare memoir that is both a riveting personal story and an inside account of a critical chapter in our recent history. Creating safe schools for all youth is now a central part of the progressive agenda in American education - and Kevin Jennings is at the forefront of that fight.

Mama's Boy, Preacher's Son earned an A- in Entertainment Weekly, was featured in Salon and The Advocate, and was called "a great read" by People.

Kevin Jennings needed an “It Gets Better” video when he was growing up, but there was no such thing in the 1960s. It was a serious matter to appear “manly” and “Christian” in his home town. Baseball and touch football were expected, and no crying allowed, ever.

Even when his father died at his 8th birthday party, Jennings knew he couldn’t show tears.

The teasing and awkwardness of Jennings’ childhood will make you cringe, but it’s a triumphant feeling when he leaves his trailer park home in North Carolina and heads off to Harvard. But even more surprising is when Kevin decides to go back home and teach, after coming out of the closet. He ends up rocking the whole town and has nail-biting standoffs with the townies.

Jennings’s story as a Lone Star gay activist in the south didn’t end in his hometown, though. Today, he’s best known as the founder of the Gay Lesbian Straight Education Network (GLSEN), which works in schools nationwide to make sure that things do get better for LGBT youth.