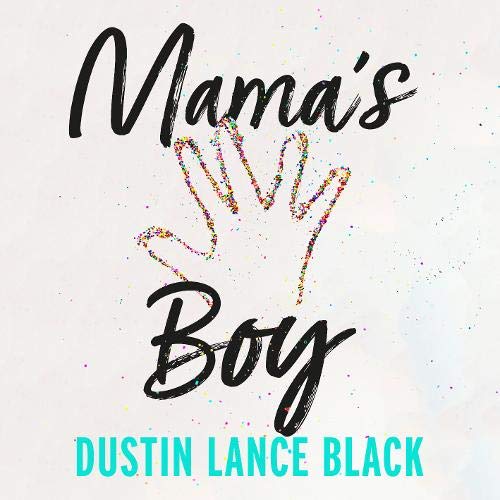 'To outsiders, my mom and I should have been enemies. Our house should have been divided -North vs South, red vs blue, conservative vs progressive, or however you want to put it. Instead, my mom and I fuelled each other. Her oil lit my lamp, and eventually mine lit hers. The tools I'd learned to wield growing up in her conservative, Christian, southern, military home were the same I'd used to wage battles that had taken me from a broken-down welfare apartment where gunfire sang me to sleep, to the biggest stages in the world, and to the front row of the United States Supreme Court to fight for LGBTQ equality.'

Dustin Lance Black wrote the Oscar-winning screenplay for Milk and helped overturn California's anti-gay marriage Proposition 8, but he grew up in a conservative Mormon household outside San Antonio, Texas. His mother, Anne, was raised in rural Louisiana and contracted polio when she was two years old. She endured brutal surgeries as well as braces and crutches for life and was told that she would never have children or a family. Willfully defying expectations, she found salvation in an unlikely faith, raised three sons, and escaped the abuse and violence of two questionably devised Mormon marriages before finding love and an improbable career in the US civil service.

When Lance came out to his mother at 21, he was already studying the arts instead of going on his Mormon mission. She derided his sexuality as a sinful choice and was terrified for his future. Mama's Boy explores what it took to remain a family despite such division - a journey that stretched from the steps of the US Supreme Court to the woodsheds of East Texas. In the end, the rifts that have split a nation couldn't end this relationship that defined and inspired their remarkable lives.

Mama's Boy is their story. It's a story of the noble quest for a plane higher than politics - one of family, foundations, turmoil, tragedy, elation, and love. It is a story needed now more than ever.

"A magnificent achievement...I cannot remember a book where I cried so often. Brave, insightful, unflinching, funny, sad, triumphant...everything. And both a warning and a hope for the times to come." (Stephen Fry)

"A beautifully written, utterly compelling account of growing up poor and gay with a thrice married, physically disabled, deeply religious Mormon mother, and the imprint this irrepressible woman made on the character of Dustin Lance Black. Their extraordinary bond left me exhilarated - it actually gave me hope for the future." (Jon Krakauer, author of Into Thin Air)

What listeners say about Mama's Boy

Smiles and tears, Truth and self belief.

I started by reading this book as it was a gift and loved it, But I travel and love listening to Audio books, I wanted to hear how his voice changed as the topics became funny or sad and it is beautifully done, It touches your heart that pain of many kinds, can build such strong foundations that drive a person onward to fight for the rights of so many. Inspiring and touching. You may not always see the whole road ahead, but if your brave enough, you can bring great change, by taking a single step in the right direction and believe in your heart it is the right thing to do. I wish Lance,Tom and Robbie Ray the very best in this life. Thank you for sharing so much.

Have tissues at the ready

From start to finish this is an emotional roller coaster. Hearing Duncan Lance Black's voice quiver as he narrates his story bring tears to your eyes. The love that he has for his family shines through his story. One of the best autobiographies I have 'read' in a long time. Do yourself a favour and get Mama's Boy.

Superb book. What an amazing personal story and story of his mother and family and Gay rights. A real page turner all the way. Highly recommended 😀

I heard Dustin talk on Suzi Ruffels Out podcast. I'd heard of him but didn't know much about him. The book was references on the podcast so I thought I would give it a go. It exceeded any expectations that I had. The book is Dustin reading his own and his family's story; and it's beautiful, sad, funny and touching. Dustin is a master story teller; the structure is great and the writing often poetic but not indulgent. I laughed and cried through this book. I am amazed by it, him and his Mum.

After watching an IG live with DLB, Ryan and Todd, I knew I had to get this book. I struggle to stay focused when reading books, so looked into the audio version. When I saw DLB had narrated it, I didn't hesitste in getting it. From the prologue to the acknowledgements, I was engrossed. I have literally laughed, cried and smiled my way through DLB's emotional narration. To hear it read as he intended when writing, gave so much more depth to the book, not that depth would be in any way lacking but the way he was able to bring people off the page with his vocalisations of accents and intonation, is something nobody reading could ever do themselves. Given he is a screenwriter, it isn't surprising how extraordinarily well stories are told and his and his Mother's family, friends, struggles and triumphs painted so clearly it is as if I've met the people and lived through it myself. Truly thought provoking and eye opening from beginning to end.

Dustin really opens up about everything his family went through. You can hear the love he has for his family. I shed many tears whilst listening to his story.

Loved it. Amazing and very moving. Highly recommend for everyone. "A promise is a sacred thing."

I thought this book was a masterpiece and it just got better and better. I didn't just cry I wailed when I listened to this book. It was so powerful, so inspiring and best of all it was a true story. I've taken away many things from this book - too many to write here but I will be buying everyone a copy for Christmas. Thank you for sharing your remarkable story with us.

A love letter to a mom.

I really enjoyed this memoir which weaves together DLB's own personal coming of age and coming out with the social and religious context of a changing America. His mom is at the heart of his story with her own survival tale of a life with polio. It is a book which reflects on difference but also shows how bridges can be built and common ground found. It is read by DLB himself and I was moved in the moments when you could hear his voice filling with emotion.

I cannot recommend this highly enough. It is a beautiful and gripping story of love, strength and perseverance, that is narrated incredibly by its author.

Everyone go and hug your Mum

A beautiful story of love, dedicated passion and a truly remarkable life’s tale of how a southern boy from Texas grew up, shared incredibly stories and took on the world to fight for what was right; and won. You will laugh, you will cry - and if you don’t...well... “thank you very much” ❤️