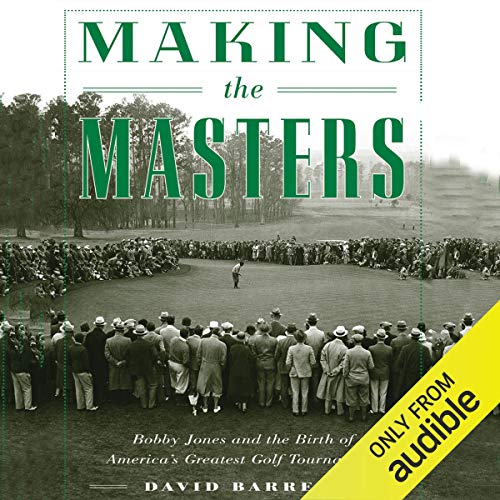 By: David Barrett
Narrated by: Jerry Whiddon
Try for $0.00

The fascinating true story of the origins of fabled Augusta National Golf Club and the creation of America’s most prestigious golf tournament, the Masters.Contested the second weekend in April each year since 1934, the Masters is the world’s most prestigious golf tournament and most-watched tournament on television. Tickets are in such demand that even the waiting list is closed, and players value the title above all others. In Making the Masters, award-winning golf writer David Barrett focuses his attention on how the Masters was conceived, how it got off the ground in 1934, and how it fully established itself in 1935.The key figure in the tournament’s creation and success was Bobby Jones, who was a living legend after winning the Grand Slam in 1930 and immediately retiring at the age of twenty-eight. He went on to found Augusta National and sought a high-profile tournament for his new course. But nearly as important was Clifford Roberts, a banker friend of Jones who not only embraced Jones’s vision but became his right-hand man in working to bring that vision to reality.Barrett explores how Jones and Roberts built the Masters from scratch, creating a golf institution embellished by the often surprising details of what that entailed as they were trying to establish a golf club and golf tournament in tough economic times. It also vividly chronicles the events of the 1934 and 1935 Masters, with Gene Sarazen’s spectacular victory in 1935 providing the climax. Set against the backdrop of golf, and America, in the 1930s, the book provides an informative and entertaining read for fans of the Masters and students of golf history.

What listeners say about Making the Masters

Great story of the course & The Masters' early yrs

Good, not great. Very good early years history. The narration is well done. Anyone wanting to learn more about the early start of the course and the tournament should enjoy it.

Sometimes a little too much data

Narrator occasionally stumbles. the content sometimes rattles off names and numbers perhaps unnecessarily and deviates into side stories spontaneously but a good story nonetheless.

Fairly interesting book. Some detail but not a real deep dive. I thought the reader did a good job. If you are a golf fan it’s worth the time.

Thanks David! Learned much Phenomenal research.

Seems the weather sure got better in Augusta then it was in the 1930s!
I could have seen Bob Jones in the White House if that job hadn't already been filled by his friend DDE.

While entertaining in many ways, the level of detail, and even for a golfer, is hard to Visualize in the audio book version.

great info about Augusta National. there is much of the history many people do not know.

Why we love the Masters

It gives a real insight to why the Masters is such an event worldwide.

explaination of the tournament golf jumps too much to the future. meaning you know whats going to happen