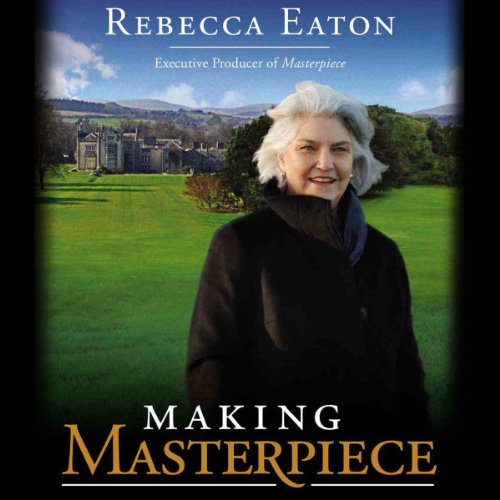 My 25 Years behind the Scenes at Masterpiece and Mystery! on PBS
By: Rebecca Eaton
Narrated by: Meredith Mitchell
Length: 9 hrs and 26 mins
Categories: Bios & Memoirs, Artists, Writers, & Musicians
4.5 out of 5 stars 4.4 (15 ratings)

The Emmy Award-winning producer of PBS's Masterpiece Theatre and Mystery! reveals the secrets to Downton Abbey, Sherlock, and its other hit programs.

For more than 25 years and counting, Rebecca Eatonhas presided over PBS's Masterpiece Theatre, the longest-running weekly prime-time drama series in American history. From the runaway hits Upstairs, Downstairs and The Buccaneers to the hugely popular Inspector Morse, Prime Suspect, and Poirot, Masterpiece Theatre and its sibling series Mystery! have been required viewing for fans of quality drama.

Eaton interviews many of the writers, directors, producers, and other contributors and shares personal anecdotes about her decades-long career. She reveals what went on behind the scenes during such triumphs as Cranfordand the multiple, highly rated programs made from Jane Austen's novels, as well as her aggressive campaign to attract younger viewers via social media and online streaming. Along the way she shares stories about actors and other luminaries such as Alistair Cooke, Maggie Smith, Diana Rigg, Benedict Cumberbatch, and Daniel Radcliffe, whose first television role was as the title character in David Copperfield.

Listeners will also get to know Eaton on a personal level. With a childhood steeped in theater, an affinity for 19th-century novels and culture, and an "accidental apprenticeship" with the BBC, Eaton was practically born to lead the Masterpiece and Mystery! franchises. Making Masterpiece marks the first time the driving force behind the enduring flagship show reveals all.

"Meredith Mitchell gives voice to the woman who has been the executive producer of the iconic 'Masterpiece Theatre' and 'Mystery!' for more than 25 years. Like the storyteller herself, Mitchell's voice offers a warm invitation into the personal and professional...With low, confiding tones that hint at loss and disappointment, she brings added depth to emotionally charged scenes, demonstrating poise with respectful pauses before a transition." ( AudioFile)

This is a combination memoir of Rebecca Eaton and of Masterpiece Theatre. I have long been a fan of Masterpiece theatre and love the theme music. It was fun to learn where and how the theme music came about and how the program began. Eaton weaves an absorbing story of her own life with that of the Masterpiece Theatre. Eaton tells of her early life as the daughter of a famous actress and a father who was a Shakespeare professor.

She tells of her apprenticeship with the BBC living in England and working for WGBH, the Boston affiliate of PBS. She tells about Downton Abbey and all the other famous mini-series presented over the years; she also includes her failures. Eaton tells of the establishment of Mystery and in 2010 obtaining Sherlock. Throughout the book Eaton comes off as a woman who is remarkable and unskeptical for a veteran TV executive; her love of her work comes through.

The book is well written and a delight to read. The book was well organized and the pace was perfect. The book is written in the first person. Eaton has actors and fellow staffers tell their personal anecdotes in the first person. For example: Diana Riggs discussed how she became the host of Mystery; various staff people and actors talked about what key roles they played and shared comments on Eaton. Made the memoir different and more interesting.

Meredith Mitchell does a good job narrating the book. Mitchell is a stage, film, television actress and audiobook narrator.

I wasn't sure I was going to find this engaging, but I did, and it only took a few days to listen to. It was a pleasure to follow the back story of Masterpiece Theatre/Masterpiece over the years, and to learn a little of the behind-the-scenes information on how these shows came to be, the challenges along the way, the personalities involved, and so on.

I hesitated, wondering if an entire book of it would get boring. It didn't. Highly recommended.