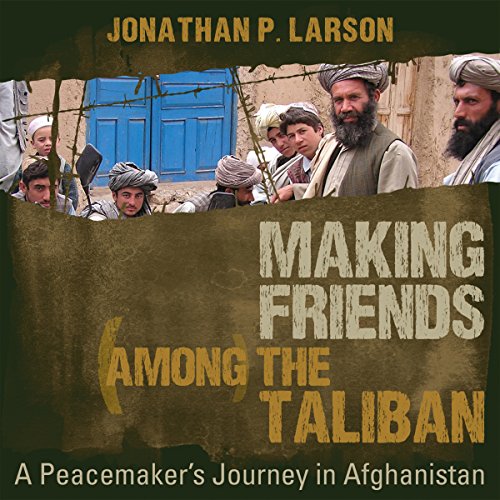 Making Friends Among the Taliban

In a remote valley north of Kabul, in August 2010, American peacemaker Dan Terry and nine other aid workers were attacked and killed in an event that made worldwide headlines. Why would one man take his family, follow faith and calling into the political and religious maelstrom of Afghanistan, and through years of war and strife believe he could make a difference?

In Making Friends among the Taliban, childhood friend Jonathan Larson retraces Dan's nearly 40 years in Afghanistan, and through interviews and eye-witness accounts, relays Dan's incredible way of daily living. Facing famine, poverty, prison, and rifle muzzles, and across three decades of kings, the Red Army, warlords, the Taliban, and the American-led coalition, Dan found improbable friendships across the front lines of conflict and inspired small Afghan communities to find a better way of life. This inspirational narrative of Dan's life and friendships offers a model for living authentically wherever we are.

What listeners say about Making Friends Among the Taliban

I was impressed by this story of Dan Terry and his life as a cross cultural peacemaker in a country that many Americans would consider to be full of enemies and without potential. The metaphor of a Christian being more Muslim than the Muslims shows some of the common humanity that Christians share with people of other faiths. I appreciate Jonathan Larson bringing this story to us. I hope that this story inspires others to live lives that defy common understandings of other people.

The story could have been very interesting if the author left out over describing things as if he was trying to make sure the book was long enough. Then the narrator spoke too slow like he was reading poetry. It was hard to pay attention to the story. All I kept thinking while trying to stay focused was, " just tell the story". It sounds like Dan Terry was an incredible person, it would have been great to have heard it in a different manner than it was written and narrated.

What didn’t you like about Jonathan P. Larson’s performance?

Don't narrate any more of your books or others.