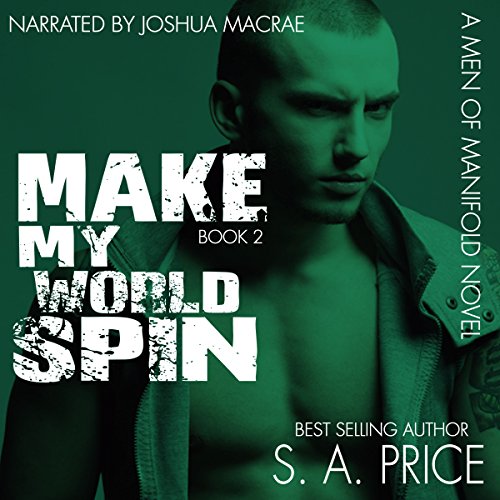 Pictures are worth a thousand words, but a photo of Canadys Herrera leaves Judas speechless. After a failed attempt at a serious seduction in Savannah, Judas has the opportunity to rekindle a possible flame with the one girl that interests not only himself but his hound side, as well. The photos she starred in were a green light, and he’s more than focused on making her his. Especially when he finds out she’s the tour photographer for the summer tour Will It and Morbid Museum has set up.

Canadys Herrera sees the tour as the best way to make her name in the industry. Being the tour photographer, as well as the preferred photog for Morbid Museum, is a dream come true, and she’s determined to prove their faith in her is well-placed. She just can’t let her interest in Judas get in the way.

When Judas reignites both their needs, it leads to a tour of kinky sex and unbridled passions...passions that culminate in Judas realizing Canadys is his Mate. But nothing is ever easy, and Canadys, for all her perfection, has horrible family members, family that would rather see her dead than happy. And with threats to his Mate real, Judas is going to have to enlist the help of the one person he’s avoided his whole life, his uncle. Because Cerberosi stick together, and when a Mate is in danger, the world will burn.

What listeners say about Make My World Spin

Judas is a talking wet dream

What did you love best about Make My World Spin?

I loved the story when I read it, but hearing the words and picturing it in my head added so much depth, heat and emotion. Judas is a god!

What was one of the most memorable moments of Make My World Spin?

Hearing the characters come alive. The sex scenes could make a lady of the night blush, after hearing them in the narrators voice.. WHOA

His ability to differentiate between characters really brought Make My World spin to a new level. I was never pulled out of the story because of a manly voice doing a females line.

YES! I shushed hubby and the kids several times so I could hear!

Canadys Herrera and Judas had a quick fling in Savannah before Judas was called away to help Ian. Now, Canadys will be on tour with Morbid Museum as the photographer for Will It Records. When she posts a series of promo photos, including ones of her in Manifold gear, Judas jumps on the invitation. Meanwhile, Canadys's father is beginning a presidential campaign and her lifestyle is considered a threat. When events begin to spiral, Judas must turn to those whom he has sworn never to contact.

If you're looking for a wild ride with a hellhound and a photographer, this is the book for you.

Audio Review:
I cannot imagine any narrator doing a better job of portraying the Will It guys and gals. Joshua Macrae is the audible voice of S.A. Price.

I asked to receive this free review audible book and wrote this unbiased review. When I first started listening to this Audible book, I wasn't sure i was going to like it but it didn't take long to change my mind. This paranormal story is filled with adventure, steamy sexual scenes, a very evil stepmother, helldogs to the rescue, and realizing what true love really is. Believe me you never want to get a helldog mad! The narrator does an outstanding job with his distinctive male and female voices. He vividly portrays the characters' personalities and emotions. If you like paranormal stories, you will enjoy this book.

This is the second book in the series and did not disappoint. It has quite a bit of steam and is pretty freaking hot! Judas is such a funny and sexy characters. I mean Hellhound...enough said. Joshua continues to do an amazing job with narration! On to the 3rd book!

I was given this free review copy audiobook at my request and have voluntarily left this review.
AudiobookObsession
AudiobooksUnleashed

This is a second chance romance between rock n roll drummer (and hellhound), Judas, and his photog lady love, Canadys. The one time lovers reconnect when she joins the tour as the photographer for Will It Records. Unfortunately, her father has his eye on the presidency and doesn't want her to threaten his aspirations. Drama, action, and kinky sex ensue.

I loved every minute of this audiobook! S.A. Price hasn't written a book I've disliked yet and Joshua Macrae's narration is fabulous. His voice... wow. I'd listen to this man read a phonebook. Seriously.

Do yourself a favor and grab the entire Men of Manifold series You will not regret it!

I very much enjoyed both the story and narration. Josh does such a wonderful job with all the voices; it helps you immerse in the story even further.

Loved this! Excellent story and characters, loved Judas and Canadys. Lots of steamy romance, action, and humor. Loved the story and the cast of characters, will definitely be looking for the rest of this series. Amazing narrator, loved listening to his voice and the accents he used for each character. I received a free review copy of this audiobook at my request and I have voluntarily left this review.

Paranormal and romance together what could be better. I have not read the other book but this one was not hard to follow as a stand alone book. Judas finds his mate,Canadys, again and the sparks flies. But her happiness is not what her family would want see happen. Judas was not going to let anything happen so he gets his uncle the one person who he didn't want anything to do with. The narrator is very good at the characters voices. He keeps you listening when you need to get some sleep. Enjoyed the book. I was given this free review copy audiobook at my request and have voluntarily left this review.

Hot and Steamy right off

Would you listen to Make My World Spin again? Why?

Absolutely I would listen again. Josh's voice and intonation makes you feel like you are really there.

The story line and interaction between all of the characters.

Which character – as performed by Joshua Macrae – was your favorite?

I loved Judas but Canadys was good too.

This book immediately brought me in and I didn't want to stop until it was done.

Blush worthy from the start!!

Where does Make My World Spin rank among all the audiobooks you’ve listened to so far?

I enjoyed this book, but it is helpful if you have read/listened to the others with all the secondary characters that are named. Personally I liked Ian's book better, but I love Judas as a character and would so have him on my team of defenders.

What was one of the most memorable moments of Make My World Spin?

I love the second half as we get to know the characters more and what makes them tick and the history and family reveals. Although who can forget when smarmy people get theirs handed to them. Oh and the reveal of Judas's real name. Totally not what I was expecting.

What does Joshua Macrae bring to the story that you wouldn’t experience if you just read the book?

You get to hear the voices while the story progresses and it gives the characters that added realness. Now when you read the books you can hear the characters in your head.

It is definitely hot and steamy from beginning to the end. I can't wait to read the next one. Trying to figure out who I want more now. One kind of moved down the ranks for me because of something he said, which actually shows how real the characters are. They can make you happy one minute and anger you the next.