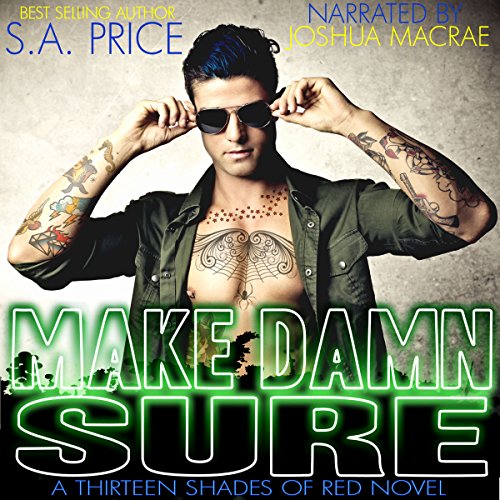 It's been 10 years since Nyx Deveraux had the night of her life with a guy that was elusive as smoke. Ten years since she was rocked, utterly. Every man since then has been lacking, and Nyx has been chasing the devastation she felt since. No one compares to the one-night-only man that haunts her dreams.

And then she meets Rusty...Formally anyway. She already knows him in the biblical sense.

Declan "Rusty" Rust made a mistake 10 years ago, one he's paid for every day since. Nyx was too much of a sexy obsession, and his pride demanded he take what was destined to be his, first, so that she never forgot him. Now, his punishment is over, and with the opportunity presenting itself to reconnect with the woman he burns for, his plans can finally be put into action.

But Nyx is not the girl she was 10 years ago, and what should be an easy seduction turns into an all-out fight for their future. A fight that could mean certain destruction for life as they know it.

What listeners say about Make Damn Sure

Would you consider the audio edition of Make Damn Sure to be better than the print version?

Haven't read this book just listened to the audiobook and I really enjoyed it, it's my first audio in this genra.

What was one of the most memorable moments of Make Damn Sure?

When Nyx's powers are awaken, it sounded beautiful. I couldn't nearly envision it, good job Joshua.

Which character – as performed by Joshua Macrae – was your favorite?

Rusty, OMG he sounded sexy as sin. But so did all the other male characters he performed, I love that southern accent.

When Rusty told Nyx that she is his, the one made for him.


This audiobook was given to me by the author at no cost in exchange for an unbiased review. And Stella Price I think you have converted me to reading/listening to more fantasy/Paranormal

WHO KNEW THE FAE WERE SO SEXY?

Where does Make Damn Sure rank among all the audiobooks you’ve listened to so far?

It was really good. I enjoy this series very much!

Declan and Nyx! I Like them both, they are good together!

Josh brings the story to life, he gives a good performance every time!

I did laugh...I thoroughly enjoy this world and these characters..this band is like a little family....and I adore them!

I did really like this book, and it was very sexy in some parts...Declan is a dirty boy! :) Nyx tried to play hard to get, but ya...that didn't last long, lol!!! I really like this series...but I am still standing strong on book 2 being my fave....I hope there will be more books in this series, because of course this book left me wanting more!!!! This is a great rocker romance series with a strong paranormal twist...and it is really a good one!!!!

Damn Sure it's sexy

Everything about this series is sexy. If you want to listen to something that will make you take out your ear buds and look around to make sure no one else can hear it... you're in the right place!

An amazing store about Nyx, the female member of thirteen shades of red and her predestined lover Declan., wasent sure at first but the more i listened too the more i really enjoyed it the magic, sex and wonder bring you to the surface with true grasps of the story .

I highly recommend this to anyone who liked rock and roll romance with a supernatural flavour.

When she was sixteen, Nyx was seduced and dumped in one night by a mysterious man. She hasn't stopped looking for him, but when she finds him she cannot forget his previous treatment. Rusty was punished for his impulsive actions with banishment from his intended mate for ten years. Producing the new album for Shades, Rusty is in the perfect position to get close to Nyx and make up for his past mistake.

Audio Review:
Joshua Macrae works wonders for the Shades series. He becomes the characters and doesn't overdo the voices. His female narration is, thankfully, not a high imitation of a woman's voice.

If you're looking for Nyx's story, this is the book for you!

Thus book is amazing!! By far the best in recording. Joshua is perfect. He seduces you into the story as much the writing does.

The third book of the 13 Shades of Red series brings the story of Nyx's happily ever after. There isn't much else I can say beyond just listen to it. Make sure to reAd the other books as well!

I was provided this audiobook at no charge by the author, publisher and/or narrator in exchange for an unbiased review. I am new to this author, but the series books prior to this volume had captured my interest so I went ahead an purchased them. I was pleased when I got to this 3rd volume that it was strong enough in the writing and story telling that it would have been a great read/listen all by itself. However, I have really enjoyed the entire series so far and look forward the the next two volumes in the series. I hope they are released to audio soon. The narrator did an excellent job with the accents and bringing the characters and story to life. The only suggestion to make this audiobook and series even better would be to add a female narrator and have a dual (back and forth) style of narration. They are getting very popular with many other listeners in my facebook Aural Fixation group, especially when they are done right.