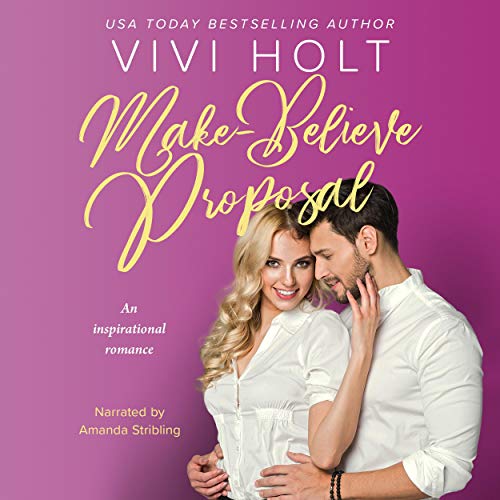 By: Vivi Holt
Narrated by: Amanda Stribling
Try for $0.00

The proposal is fake, but his feelings are real.

A tale of faith, second chances, and forbidden love.

Billionaire businessman Roland Baker has moved on with his life but never opened his heart to love again since losing his wife six years earlier. The nanny he hired to help raise his two girls has, piece by piece, woven the broken strands of their lives back together. So, when her ex-boyfriend breaks her heart, he’s ready to jump in with a fake proposal to help her save face.

June Green always wanted to be a nanny. She loves her position, working for the hottest billionaire in Atlanta and taking care of his beautiful daughters. When her ex-boyfriend parades his new fiancée in front of them all, she’s devastated...until Roland gets down on one knee, surprising everyone.

He’s her friend, her boss, and the most eligible bachelor in town. Anything more between them would be too complicated and could risk the life she’s grown to love. But an unexpected date leads to a surprise, spine-tingling kiss that changes everything between them and sparks feelings she can no longer ignore.

What listeners say about Make-Believe Proposal

Though the story line is very slow with lots of interruptions with the development of the relationship making it very slow and angsty with no real communication. Had high hopes bc I like this author.

Another great story in the Series!

This is the fifth book in the Make-Believe Series. I love this Series. Roland and June story is beautifully written, sweet and clean. This is an older man and younger woman romance. June, a nanny, is a lovely woman, caring and sweet. Roland, a widower, billionaire, dad of two daughters, is handsome, protective and caring. I like their slow burn story. They are great together. I love the fake proposal scene! The little ones are so cute! Amanda Stribling did a great job with the narration. I enjoyed it. Looking forward for the next book in the Series, Make-Believe Marriage.

This one has that Hallmark moment

This story is romantic. Roland is her friend and helps her save face by proposing to his nanny. Even though it's a fake proposal, Roland's feeling are real for his nanny. She has helped his family and he wants to do everything to help her. They find that spark that turns friends into lovers. This story is heartwarming and left me feeling good.

If you've read other books in this series you will know that each stands alone but there are characters you will know from other books. In this case, our football hero's sister takes center stage as nanny to a self-made billionaire's two young daughters. A well thought out plot, likeable characters, wonderful narration and a clean, sweet, faith-based (but not intrusively!) tale--what's not to love?

Another good book in the fun escape series!

A widow with two little girls. A nanny who loves these girls as if they were her own. Can these two hearts come together or are their individual wounds from their pasts just too deep to overcome.

I have enjoyed this series because it is a great way to listen to a book that is just fun. :) Vivi brings a fun story together with good characters and fun secondary characters including a great little dog. Amanda Stribling continues her great narration to this series.

I was given this review copy audiobook at my request and have voluntarily left this review.

Such a sweet and real life-like story... A widower with two girls hires a nanny to help out and the nanny fits right in. The nanny is struggling from a break-up and trying to prove to her ex-boyfriend that she's moved on. Can she convince her boss to play along with the harmless deception? What could possibly go wrong? The narration was great and I thoroughly enjoyed listening to this book... was it predictable? Yes, but honestly what Hallmark type movie isn't and yet we still love them!

Let this proposal steal your heart

This is book 5 in the series but can be listened to as a stand alone. Vivi writes great stories . That feel like real life one . You can actually picture all the characters and the events .
Roland is the hero. June is the heroine.

Roland is a widower with two young girls . He needs help with the children. Roland tries to spend as much time with his beautiful girls but he knows he can do better. He hires June , to take care of them. June feels right at home as a family after a while . Love how there was love shown through action and words .
June was hurt from a pryer boyfriend and it show that boyfriend that she has moved on June suggests to Roland that they pretend that they are engaged. Roland at first cant believe it. He thinks June is crazy and it’s a joke . Will Roland change his mind . Grab it and see . How will the girls feel.

The performance of Amanda was good. Amanda did the story justice. Her tone for the characters were great

Roland has closed off his heart after loosing his wife, but his long time friend/nanny and her jerk ex has him doing stupid things and wondering if maybe it time to open up again. June loves his kids and they love her. But is she even ready to move on for her ex? Sometimes timing is everything. Amanda Stribling does an excellent job on the narration!

A very sweet story about moving forward and realizing what is important in life and love. I received a complimentary audio and this review is voluntary.

An impulsive proposal makes it interesting!

A sweet romance. She's the nanny and she cherishes the friendship she and her boss have. Her previous boyfriend was a real jerk. When a chance encounter brings them together her boss can't stand the way he's treating June and her sweet wonderful boss drops to his knee and proposes. But the fake engagement comes with interesting complications and more mixed signals than I thought possible. June and Roland are a sweet couple and it's a wonderful story. Amanda Stribling does a wonderful narration. I recommend the book and the audio.