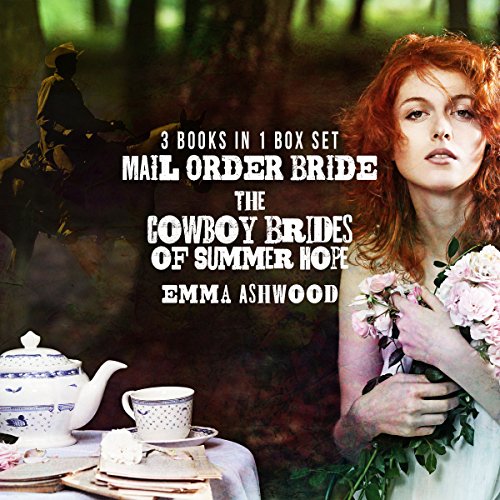 By: Emma Ashwood
Narrated by: Leonor A. Woodworth
Try for $0.00

A series of city girls head west to escape their problems...they arrive, full of promise, at a place called Summer Hope.

One Bride for Two Cowboy Brothers

A young woman's father is determined to marry her off to the worst man in town....she manages to escape but walks into a family feud, a mother pretending to be her son, and her future husband wanting nothing to do with her. With seven days till the next train, she has to endure the situation with grace...maybe.

A young nurse heads west to help her friend give birth. She desires adventure...and to escape a man she must marry to pay off the family debt.

Sister Brides for the Brothers

Two young sisters flee west after a promise of marriage from a pair of undertakers. However, when they arrive, things are not quite as they had first appeared.

This is a 3 book set. Good narration. Katie doesn't want to marry the man her Father wants her too. She has been corresponding to Robert in Texas, or so she thought. With the help of her friend Elena, she runaways to Texas to meet Robert. She is greeted by his brother Henry and finds out the truth. Now what does she do. The second story revolves around her friend Elena. She is having the same problem, a man she doesn't want to marry. She heads to Texas to help Katie. The man follows her. The third story is about Elena's two sisters, who head to Texas also to marry two undertaker brothers. What one will do for love. Cute stories.