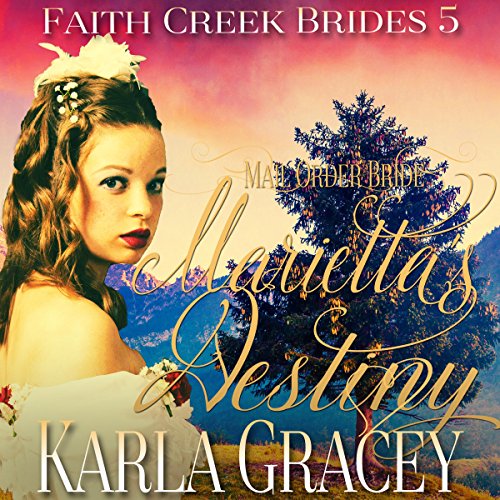 Ambassador's daughter Marietta Winthrop has given up her own prospects of marriage and family to be a companion to her melancholic aunt. She secretly longs for adventure and the love of a man who won't try and change her but knows she is hoping for too much. She knows that all the men of her acquaintance would banish poor Aunt Clara to a sanatorium and she will not let that happen. But keen of mind, and inspired by a special day spent at the botanic gardens, Marietta begins to wonder if there just might be more to life after all.

Byron Hempthwaite is a disappointment - to his own parents, at least. But he has never let it stop him from following his passions. A highly respected lepidopterist, he has found success and contentment, but he longs to find love, too. But, just as he thinks he may have found such joy, a family tragedy tears him away to Faith Creek, Texas. But, being so useless, he forgot to ask the love of his life for her hand in marriage before he left. He knows she is pretty and clever, witty and delightful, and why should she wait for him? Will he be too late to win the woman he loves back?

A good short story Alan does a great job narrating these type stories. it is easy to get into these stories. If my review was any help will you please click the helpful link. Thank you

I’m enjoying this series! Often authors have run the gambit by this time and the series starts to repeats the stories a bit! Not so with Karla! Each story is unique and varied and I can’t wait to learn hot the next couple will meet!
The Aunt’s voice was a bit off to me, but the rest of the narration was great!

This is another short and sweet book by this author. I like her inspirational reads. I think she does a good job at coming up with stories that can be listened to by the entire family. I liked the characters and the storyline of this one. Once again my only complaint is the fact that they are short. I think it leaves a lot of unanswered questions and I always want more. They are well written and fun to listen to. I like the narrator as well. He did a good job.

wonderful delightful listen i got lost in

What a touching romantic read that really touches your heart. One woman gives up everything to stay with an aunt that loves her beyond all measures when her parents only think about their selves. Her aunt has issues and she is unwilling to leave her behind. Marietta meets Byron who has followed his butterfly passion. In return he gives it to Marietta and her aunt. Just when things start taking off between them he has to leave his beloved grandfather is very ill. He promises to write and see where things might go. She waits and waits writing and nothing comes from him. His promises were empty she moves on. Her aunt talks her into doing something wild and a new life opens up for them.


Mr. Taylor does a wonderful job of narration from the many different characters to the feel of emotions. You never are in doubt just who is talking or what they are feeling. I found both his female and male voices to be a delight from the strong male to the soft female you could really feel the pain, sorrow, and happiness he gives them. I heard no background noise or any places where the volume changes. There are no repeating of words just a wonderful delightful listen. If any breaks where taken I could not tell. His voice is strong and clear giving you a delightful listen. His performance is outstanding from the emotion to his voices he really make the story come alive. He is a very talented narrator that pulls the listener in giving a very vivid listen that you can picture the scenes in your mind.

This is a clean sweet read which is very emotional, finding a love and losing it but finding something so much more. As Marietta and her aunt move into a new life in a different place things take place that will change their life. Byron is never far from her thought and unbeknown to her she isn’t far from his. His grandfather has really turned the tables on him even when he is near to death. Byron finds he wants Marietta but it may be too late.

I love the characters, the plot and the strong emotions. It is very well written with a wonderful surprising ending. I loved Marietta and Byron for their devotion to their families and really to each other. Both are strong well and so caring. Marietta aunt seem low there is a mind issues but I am use what it is. She goes seem to come out of it with the move, such wit, loving and so caring I wanted so much to take care of her myself. I really love this from start to finish.

I love all the characters in this story. But Aunt Clara is an absolute joy and my favorite!

Alan Taylor, as always, does a wonderful job narrating.

Faith Creek continues to have their men find the love of their lives through mail order brides. The spunky, smart Marietta is not accepted as the book worm and curious woman that she is and finds companionship with her grandmother. Their friend, Byron who loved to banter with these two moves back to Faith Creek to take care of his ill father. Now that these two women make the choice to find a new life where they will be accepted, and decide to do this through the mail order bride letters. Little do they know who they are going to meet up with when they get there! Gracey continues to give well developed characters and good, clean fun in her novellas. They are wonderful nuggets to enjoy.

With Alan Taylor continuing the narration of this series, there is a down home feeling when his warm, baritone voice begins. He brings a sense of comfort as you listen.

A very sweet story. Grandpa sure was sneaky! Loved the Aunt as well. Good story

A sweet clean and wholesome historical western inspirational romance. I enjoyed this story for sharing a love that developed without sexual content. The development was enjoyable withthe listener guessing if there were going to be misunderstandings or if it would move smoothly.


The narration was well done. The characters were well portrayed by Alan Taylor.