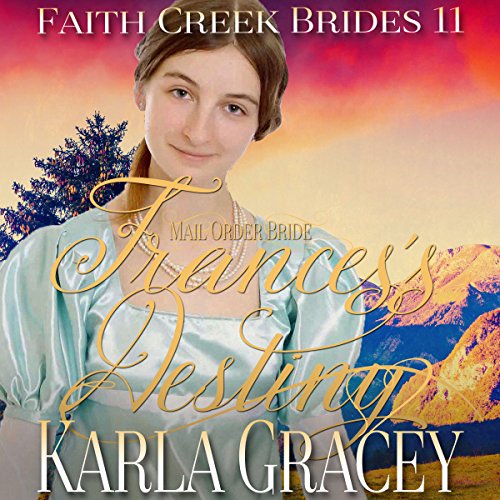 Frances Harman has spent a lifetime living out of suitcases, a staunch supporter of her papa as he builds an empire as a hotelier. A quiet soul, happiest when out of sight, left alone to pursue her own interests and happiness, she has never felt the lack of companions or excitement in her life.

Yet, since his remarriage, she has been forced into a new world, one of parties and balls and afternoon promenades, and has found herself overshadowed by her beautiful stepsister, Maria, in every way. But in a moment of uncharacteristic bravado, she responds to a matrimonial advertisement in the newspaper. The life of a debutante is not for her, but why should she not search out a life that might suit her better?

Dr Marlon Carter has not been in Faith Creek long and for a time rather thought himself in love with his partner's delightful bride, Susanna. But his desire for his own wife and family has begun to play upon his mind. A town doctor should have a wife, after all. But can he reconcile the actions and troubles of his past and allow himself to enjoy the love and affection that could be his for the taking?

I’m always so shocked when the characters find love so quickly! I know this series is all very short books, but it’s still a bit mind blowing to me.
I liked the hidden past of the doctor’s life! It was a different and unique situation! Karla really puts a lot of thought into each story and obstacle they must overcome! As many books as she writes, each one is surprisingly different!

This is a great short story. I liked the characters and story. I am looking forward to listening to more of her books.

I enjoyed visiting Faith Creek once again. I like the characters and the town. I am sure to visit again. These are fun short books to listen to. I do still wish there was more to each story however there is just enough to know there was a HEA. Each of them is a unique and different story. This one was no exception. I really enjoy this narrator as well. He does a great job reading each book. I am sure others will enjoy both the book and the narrator.

Frances father wants to build a hotel and take his family with him, his step daughter is a spoiled pain in the neck who doesn’t want to go. She has high dreams of catching a wealthy man. After Frances has a major talk with her parents she goes with her father alone. Once there she meets a man, with misunderstandings that gets in their way. The find they do love each other but it is time for her to go back home. Will the good doc left her leave or finally understand he can’t live without her.


Mr. Taylor does a wonderful job of narration from the many different characters to the feel of emotions. You never are in doubt just who is talking or what they are feeling. I found both his female and male voices to be a delight from the strong male to the soft female you could really feel the pain, sorrow, and happiness he gives them. I heard no background noise or any places where the volume changes. There are no repeating of words just a wonderful delightful listen. If any breaks where taken I could not tell. His voice is strong and clear giving you a delightful listen. His performance is outstanding from the emotion to his voices he really make the story come alive. He is a very talented narrator that pulls the listener in giving a very vivid listen that you can picture the scenes in your mind.

This is a clean sweet read about growing, leaning and understanding not everything is at it seems. Marlon has a secret that makes him think no woman would want him. It gets in the way of true happiness. Frances has had enough and just wants to leave. I liked the plot and the way it was laid out. The romance is interesting and touching. I found it to be a good listen.

Enjoyed this one very much, especially the ending when he proposed to her in front of her father

A different kind of bride!

Frances is a different personality than we have seen go to Faith Creek in the past, and she is fun and refreshing. Traveling with her father all of her life to destinations for his work, Frances ends up corresponding with the new Dr, Marlon Carter. He has settled in Faith Creek as the medical practice grows and is longing to have the happiness he sees his colleagues have found. When Frances ends up in Faith Creek, the two are attracted to each other. Marlon holds a secret close to his heart that he is afraid no woman will ever be able to forgive, so is not sure about marrying Frances. Will their love be strong enough to see past it? Will Frances want to return home to her stepmother and pretentious stepsister? Life in Faith Creek is never boring! This story is heartwarming and loving.

I have enjoyed Alan Taylor again with this story. Warm and rich, his voice is perfect for historical westerns.

I really like Frances, she's fun, smart and stubborn. When she loves, she loves with every fiber of her being.


This is a sweet, clean historical western mail order brides romance in the Faith Creek Brides series. This is the stoy of Frances Harman and Dr Marlon Carter. They met thu advertisment and mail. Will their dreams come true or will everything fall apart?


The narration was well done. The characters were well portrayed. Alan Taylor is always an enjoyable listen.