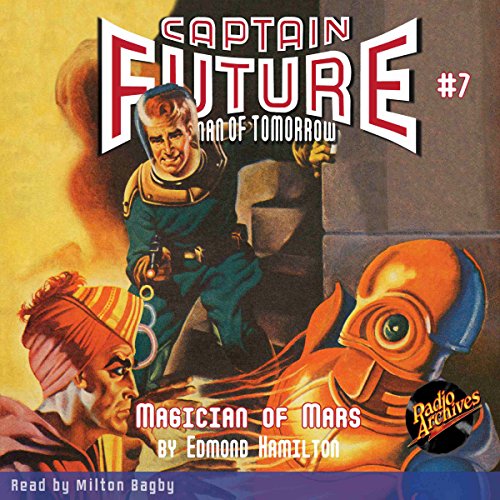 By: Edmond Hamilton,Radio Archives
Narrated by: Milton Bagby
Try for $0.00

Renegades from nine worlds crash out from interplanetary prison in a weird quest for phantom treasure. Follow the Futuremen as the greatest feud of all time catapults them into the fifth dimension.

Captain Future is the roving marshal of the spaceways, supported by the Futuremen, the best deputies the universe has to offer. And as strange and exotic as the heroes may be, the villains are cut from even more exotic, weirder cloth.

Captain Future has no shortage of enemies. Beings from across the universe and beyond plot to dominate planets, to destroy galaxies, and find themselves defeated by Captain Future. Only one of his foes, however, proved evil enough to face Captain Future twice. Ul Quorn, the Magician of Mars, is actually the son of the man responsible for murdering Curtis Newton's parents. Intelligent, ruthless, and strong, Quorn is nearly Captain Future's equal in every way and comes closer than any to ending the life of the Man of Tomorrow.

Captain Future learned much of what he knew from perhaps the oddest surrogate father in fiction - The Brain. Simon Wright, a brilliant scientist and companion to Curtis Newton's father, became so riddled with age and sickness that the only option to continue his life meant literally living as a brain in a specially designed box. When Captain Future's parents were killed, Wright not only serves as Captain Future's mentor, but also as the leader of the trio of Futuremen who join Captain Future on his wild escapades. More than just a brain in the box, Simon Wright plays a major role in Captain Future's history and stories.

Rocket into science-fiction adventure and discover new worlds. Ripped from the pages of the summer 1941 issue of Captain Future magazine, Magician of Mars is read with wonder and excitement by Milton Bagby.

What listeners say about Magician of Mars