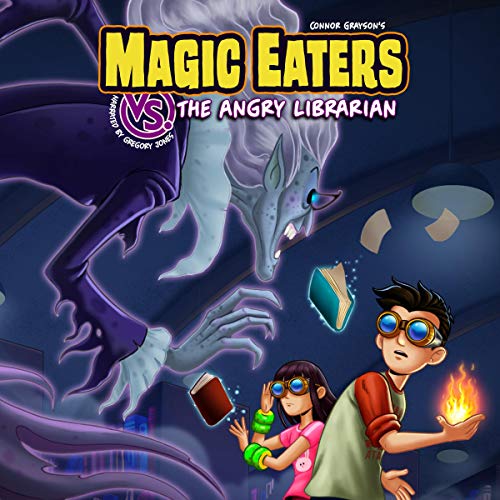 Magic Eaters vs. The Angry Librarian

By: Connor Grayson
Narrated by: Gregory Jones
Try for $0.00

How do you beat a boss mob that doesn’t fight fair?

Meet Charlie, an accomplished gamer, who suddenly finds himself inside a game where monsters are real and magic food is gross! If he doesn’t lose his lunch first, he might just become powerful enough to win. But when the first boss mob appears at the worst possible time, he’s in big trouble. Will he survive? Or, is death in this world really "game over"?

Magic Eaters is a zany new adventure series for kids aged eight to 12. Where gross food gives you the best spells and monsters have hilarious powers. Its fast-paced storytelling keeps up with today’s most exciting video games.

What listeners say about Magic Eaters vs. The Angry Librarian

FANTASTIC! My class LOVED it!

I am a fourth grade teacher and this audio book kept my class engaged the entire story! The storyline was exciting and my class loved the characters. With so many kids into video games, this made them excited to hear a story like this. I highly recommend this to elementary school teachers and kids everywhere!

So fun listening to this book and hearing all the voices to really help the characters come to life! My 10 year old niece loved it!