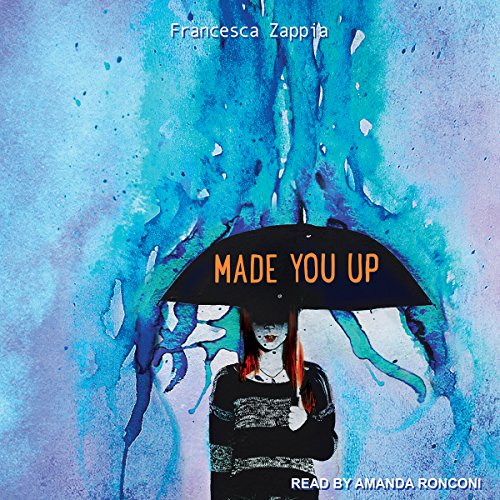 By: Francesca Zappia
Narrated by: Amanda Ronconi
Try for $0.00

Reality, it turns out, is often not what you perceive it to be - sometimes, there really is someone out to get you. For fans of Silver Linings Playbook and Liar, this thought-provoking debut tells the story of Alex, a high school senior - and the ultimate unreliable narrator - unable to tell the difference between real life and delusion. Alex fights a daily battle to figure out what is real and what is not. Armed with a take-no-prisoners attitude, her camera, a Magic Eight Ball, and her only ally (her little sister), Alex wages a war against her schizophrenia, determined to stay sane long enough to get into college. She's pretty optimistic about her chances until she runs into Miles. Didn't she imagine him? Before she knows it, Alex is making friends, going to parties, falling in love, and experiencing all the usual rites of passage for teenagers. But Alex is used to being crazy. She's not prepared for normal. Can she trust herself? Can we trust her?

"Debut novelist Zappia presents readers with a wholly unreliable narrator, [but] the characters all seem authentic, thanks to Zappia's careful attention to detail." ( Booklist)

What listeners say about Made You Up

lovely coming of age tale that uses mental health to push along a real to life story. doesn't make fun of mental health but shows it in a truthful light.

I love the narrorator. Thanks to her voice and the story and the emotion it has become my favorite book. I encourage giving it a try!

This is one of the best audiobooks I've heard in a while. The main character's illness hit close to home, and by the end, I was ugly crying.
#mentalillness #tearjerker #mustread #sweepstakes #tagsgiving

Story was okay, narrator was eh

the story was a little too out there for me. there were too many unlikely things that made this story unrealistic, even for an unreliable narrative. the woman who narrated this sounded like she should be doing kid children's books, not reading for an 18 year old.

One of my favorties

Made You Up is one of my favorite YA contemporary books ever. I read this when it was first released and I loved it. I recently bought the audio version of this, and just finished listening to it. I found that my love for this book was still there, so I thought it was the perfect time to review it!

This book follows Alex, a teenage girl with schizophrenia. Her paranoia and schizophrenia makes her question everything and everyone. She takes pictures every time she sees something a little out there so she can look back on it to make sure what she was was actually there. She is unreliable, kind of judgmental, and flawed, but fierce, and I loved her.

Another character we meet is Miles, the King of Pranks. He isn’t like the usual characters you meet in contemporary books, I think. He’s a smartass, offbeat, and extremely driven. He’s got a frosty exterior, but above all he’s lonely and heartbroken.

What I really appreciate about this story is the fact that there’s no insta-love. In fact, Alex and Miles don’t even like each other when they first meet. The way they progressed from nemesis to friends to eventually more was very natural. Also, Alex isn’t “magically cured” here. Making friends and falling in love doesn’t cure Alex from her schizophrenia.

While this isn’t as fast-paced or action packed as a fantasy novel, this is one of the most exciting contemporary books I’ve ever read. There were twists and reveals that kept you on your toes and moved the story along great.

I love these flawed characters with all my heart, and I’m glad this book still manages to make me smile and cry all these years later.

Overall, I’d say this was worth the listen. There were some parts of the storyline that were kinda weird/confusing, but other parts had me still invested in the story. As some other reviews had mentioned, it’s not a completely accurate portrayal of schizophrenia, so I would definitely recommend to keep that in mind while listening. But yeah, overall it wasn’t bad!

I’m not the target audience, by far, and yet—I couldn’t stop listening—I knocked it out quickly! Alex, our protagonist, is at once fascinating, identifiable, kind, and unreliable... the best the way to tell a story.

My soul!!! This was such an amazing book. I wish I had fancy words to use in this review like Miles would... but I am forever Alex: a little crazy, but all heart.

I selected this book because it's narrated by one of my favorites - Amanda Ronconi. She uses her singular voice in an understated way that somehow states everything.

But the story! It's charming and scary and twisty in spite of following the usual romance (girl meets boy, girl dislikes boy, etc.) rules.

Alex is the new kid. It's her senior year and she's spending it in a (really weird) mean kid high school, AND she's coping, not always successfully with schizophrenia. Despite therapy and meds, she's not always sure of what's real and what's not. That's why she carries a camera with her at all times, snapping the hinky stuff all day long. This does not increase her popularity very much.

There are some very strange things happening at her school - or are there? - and Alex is determined to get to the bottom of various mysteries. But the endeavor is like peeling an onion. Or maybe like spinning plates on sticks. Or herding snakes.

Ms. Ronconi does an amazing job with a genre that is dramatic and funny and dark. The whole thing is just splendid.