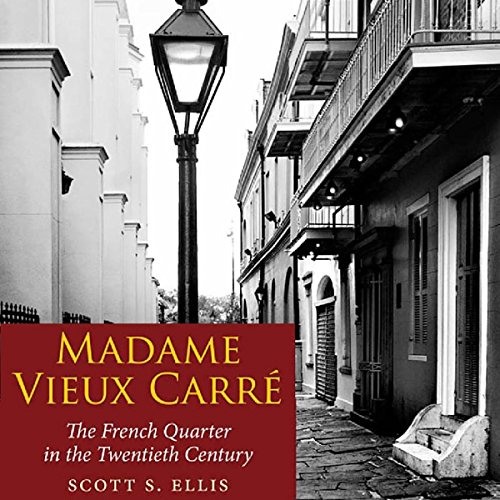 Celebrated in media and myth, New Orleans's French Quarter (Vieux Carré) was the original settlement of what became the city of New Orleans. In Madame Vieux Carré, Scott S. Ellis presents the social and political history of this famous district as it evolved from 1900 through the beginning of the 21st century.

From the immigrants of the 1910s, to the preservationists of the 1930s, to the nightclub workers and owners of the 1950s and the urban revivalists of the 1990s, Madame Vieux Carré examines the many different people who have called the Quarter home, who have defined its character, and who have fought to keep it from being overwhelmed by tourism's neon and kitsch.

The old French village took on different roles - bastion of the French Creoles, Italian immigrant slum, honky-tonk enclave, literary incubator, working-class community, and tourist playground. The Quarter has been a place of refuge for various groups before they became mainstream Americans.

Although the Vieux Carré has been marketed as a free-wheeling, boozy tourist concept, it exists on many levels for many groups, some with competing agendas. Madame Vieux Carré looks, with unromanticized frankness, at these groups, their intentions, and the future of the South's most historic and famous neighborhood. The author, a former Quarter resident, combines five years of research, personal experience, and unique interviews to weave a history of one of America's favorite neighborhoods.