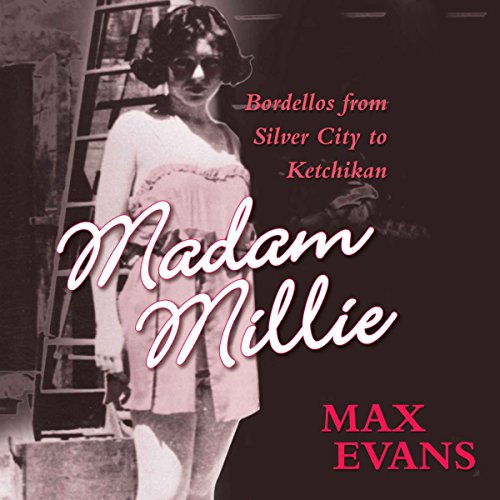 Mildred Clark Cusey was a whore, a madam, an entrepreneur, and above all, a survivor. The story of Silver City Millie, as she referred to herself, is the story of one woman's personal tragedies and triumphs as an orphan, a Harvey Girl waitress on the Santa Fe railroad, a prostitute with innumerable paramours, and a highly successful bordello businesswoman. Millie broke the mold in so many ways, and yet her life's story of survival was not unlike that of thousands of women who went west only to find that their most valuable assets were their physical beauty and their personality. Petite at five feet tall with piercing blue eyes, Millie captured men's attention by her very essence and her unmistakable joie de vivre.

Born to Italian immigrant parents near Kansas City, she and her sister were orphaned early and separated from each other. Millie learned hard lessons on the streets, but she never gave up and she vowed to protect and support her ailing older sister. Caught in a domestic squabble in her foster home, Millie wound up in juvenile court with Harry Truman as her judge. This would be only the first of many brushes in her life with prominent politicians.

When physicians diagnosed her sister with tuberculosis and recommended she move west to a Catholic home in Deming, New Mexico, Millie moved with her. Expenses ran high and after a brief stint waiting tables as a Harvey Girl, Millie found that her meager tips could easily be augmented by turning tricks. Thus, out of financial need and devotion to her sister, Mildred Cusey turned to a life of prostitution and a career at which she soon excelled and became both rich and famous.

"The story of Mildred Fantetti Cusey sells itself -- a memoir about a strong, resourceful survivor in an age of self-made entrepreneurs. " (El Paso Times)
"Local color is an ever-present element in this story, from crooked cops to belligerent johns, and Millie herself stands larger than life as the prime source of energy, humor, and business acumen that made her efforts successful." (The Bloomsbury Review)

What listeners say about Madam Millie

While I enjoyed the story greatly I come away somewhat frustrated. The subtitle of the book, "Bordellos from Silver City to Ketchikan" led me to believe there would be more that a couple mentions that she had a bordello there. It was because of Ketchikan that I bought the book. I cannot find a search feature in the app that would like me look for Ketchikan.

This is such a great story of not only historical value but of the strong will of an orphan that would not quit! Millie was a Madam with a heart of gold and savvy business woman. Her story made me wish I could sit down with her and have a drink and listen to all her adventures. This book is a definate read.

What a fascinating lady and her story is truly incredible.

I travel NM for work and this will make my stays in the cities mentioned more interesting. This made me love NM more than I already do. Rest peacefully Millie and thank you for telling your story.

I love the way this book was read it only added to an already interesting story.

Where does Madam Millie rank among all the audiobooks you’ve listened to so far?

I would rank this in my list of biographies as one of the higher ones due to the story feel of it rather than someone reading off dates and events.

The scene I enjoyed the most was how she handled her second husband.

This book makes me want to find more history on the era.