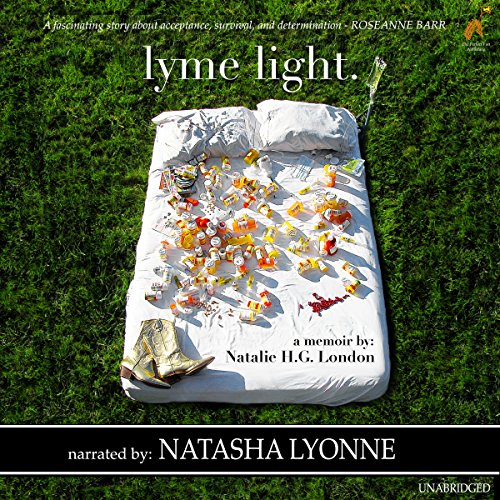 Lyme Light is a dark comedic offbeat memoir about a girl who was an extraordinary musician but terrible at flirting, a girl who spent her life fighting against her startling past and loneliness by immersing herself in the fictional world of reruns of Roseanne and Beverly Hills 90210. Lyme Light is a story about a girl who had 13 credits left to graduate on the Dean's list from Columbia University, was playing indie rock shows in New York City, and meeting with some of the top record labels in the country, when her world was obliterated by the smallest click of a throw away camera and the smallest bite of a tick.

Author, Natalie London, takes you into the world of losing and regaining memories, the ability to walk again, talk again, and adjusting to a life of IVs to the heart and endless hours in hyperbaric chambers. She seamlessly combines disease-ridden delusions, falling in love, and early-'90s television nostalgia, all into one heartbreaking story.

Lyme Light is not your average illness memoir. London gives a voice to those who, like herself, refuse to accept the status quo of how one is supposed to deal with illness, tragedy, and trauma. Those dealing with a critical illness are convinced they are fighting tooth and nail to get their life back, however London brings the listener into the bittersweet revelation that there is no going back. In a surprising and artistic ending, she leaves listeners with a taste of another way out...a new driver's license, a new phone number, a new name...a brand new life.