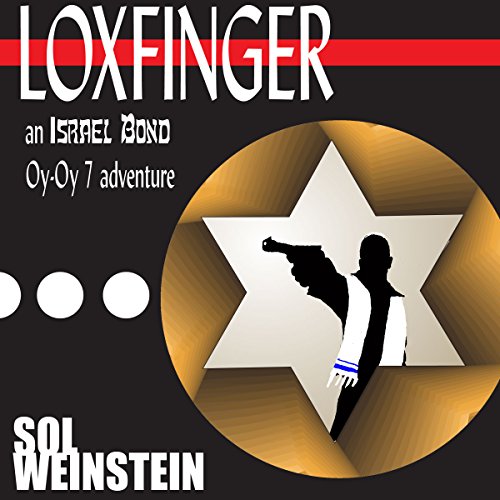 Israel Bond may seem like a simple (if sexy) salesman for Mother Margolies' Old World Chicken Soup, but when the Holy Land needs his skills - his quickness with a pun, his second-to-none semitic seduction techniques, and (if absolutely necessary) his abilities at actual espionage - then the man known by the code name Oy-Oy-7 (licensed not only to kill, but to say prayers over the corpse) is there to do what needs be done.

In a land surrounded by its enemies, Oy-Oy-7 is called on to guard the nation's great benefactor, the generous but odd Lazarus Loxfinger. Is there more to Loxfinger than meets the eye? Bond aims to find out, even if doing so requires sleeping with dozens of exotic beauties!

In the mid-1960s, when Playboy was serializing the adventures of the world's most famous superspy, they interspersed them with the rollicking adventures of Israel's most hilarious weapon, Israel Bond. After the book editions of what the Chicago Tribune called "probably the funniest secret agent parodies ever written" had sold what the publisher claimed was over a million copies (the author suspects they were exaggerating somewhat, with the books totaling six figures in sales but not breaking the million mark), they were allowed to fall out of print. He's back!

Neither particularly good or dredfully awful

Honestly, I’m not sure why this audio book exists. It is too stupid to actually be offensive, but so stereotyped that it isn’t funny. I’m not sure what the author was trying to accomplish.

Holds up after all these years

Weinstein parodies the Bond series of spy thrillers brilliantly. What you would expect to be uninteresting, the repetitive "darkly handsome" epithets and the politically incorrectness of "Levantine" bad guys only get funnier as they are relentlessly dragged out again and again. This is something I had not noticed decades ago when the book came out. Weinstein has made some changes in the text, and as I no longer have a copy of the book, I can't compare. It is now a period piece, capturing a bygone era - the age of bored housewives attending Hadassah meetings, Borscht-Belt hospitality, and unbridled machismo.