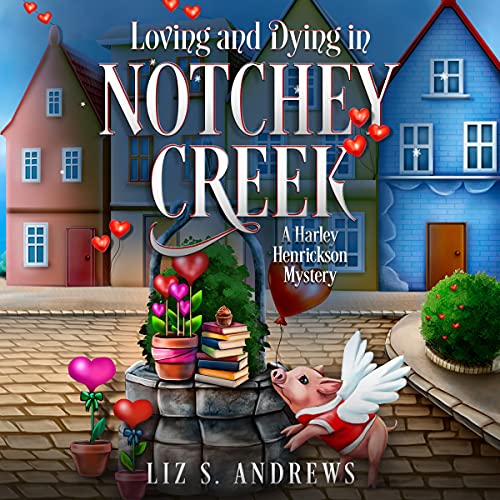 Loving and Dying in Notchey Creek

It's Valentine's Day in Notchey Creek, Tennessee, and whiskey distiller Harley Henrickson is volunteering at the Reading is Love festival. Books line the streets, snowflakes dapple the air, and paper hearts adorn storefront windows. Even Harley’s pet pig Matilda is feeling festive, gracing the sidewalks in her Cupid costume.

But no sooner have the festivities begun, when Harley finds the charred remains of a car and a body outside Briarwood Park. While Sheriff Jed Turner is initially convinced the fire was an accident, Harley suspects something more sinister. When a much-disliked editor of the town’s newspaper is murdered and Harley's best friend Tina Rizchek is framed for the crime, Harley decides to investigate.

A trail of poison-pen letters, car fires, lethal cupcakes, secret affairs, and blackmail, leads Harley to the town's new bookstore and a handsome graduate student who has come to Notchey Creek under mysterious circumstances. In the meantime, Harley has her hands full in other areas. She's pet-sitting Beau Arson's rescue dog Ozzy, while Beau is in Los Angeles.

Aunt Wilma and Opha Mae are determined to get her a date for Valentine's Day. Uncle Tater and Floyd have entered the bachelor auction. Jed is in an especially foul mood. Grandma Ziegler and Petie are philosophising about the finer points of Pride and Prejudice. And Harley feels the pull of her heartstrings when she learns Eric Winston is single again.

Booklife by Publishers Weekly Editor's Pick: "In crisp, engaging prose, Harley's methodical clue-gathering finds the hero investigating her town's love triangles and a blackmailing scheme, while Andrews keeps the pages turning with twisty plotting, clever red herrings, and local color as distinct as the recipes for whiskey cocktails that close out the book."

What listeners say about Loving and Dying in Notchey Creek