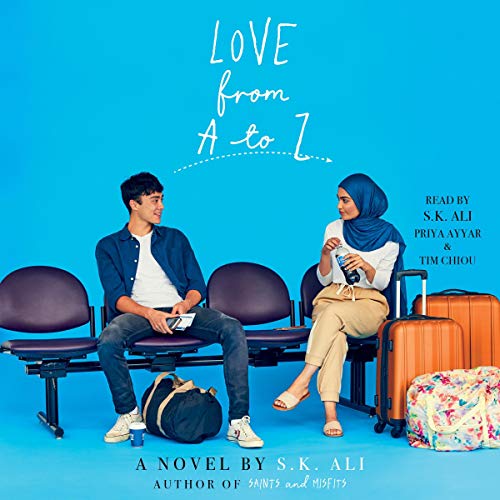 Love from A to Z

From William C. Morris Award Finalist S.K. Ali comes an unforgettable romance that is part The Sun Is Also a Star mixed with Anna and the French Kiss, following two Muslim teens who meet during a spring break trip.

A marvel: something you find amazing. Even ordinary-amazing. Like potatoes - because they make French fries happen. Like the perfect fries Adam and his mom used to make together.

An oddity: whatever gives you pause. Like the fact there are hateful people in the world. Like Zayneb’s teacher, who won’t stop reminding the class how “bad” Muslims are.

But Zayneb, the only Muslim in class, isn’t bad. She’s angry.

When she gets suspended for confronting her teacher and he begins investigating her activist friends, Zayneb heads to her aunt’s house in Doha, Qatar, for an early start to spring break.

Fueled by the guilt of getting her friends in trouble, she resolves to try out a newer, “nicer” version of herself in a place where no one knows her.

Then her path crosses with Adam’s.

Since he got diagnosed with multiple sclerosis in November, Adam’s stopped going to classes, intent, instead, on perfecting the making of things. Intent on keeping the memory of his mom alive for his little sister.

Adam’s also intent on keeping his diagnosis a secret from his grieving father.

Alone, Adam and Zayneb are playing roles for others, keeping their real thoughts locked away in their journals.

Until a marvel and an oddity occurs....

What listeners say about Love from A to Z

Love from Adam to Zainab

Who else googled marvels and oddities journal? Just me. Okay (=^▽^=) Anyway, when I first saw the cover I felt happy but worried, blue in literature means illness and it also means someone will die by the end of the book, but the cover was also romantic and a Muslim girl is on the cover! I liked the issues addressed in the book, from Burkinis and how people react to them, to converting to Islam, to racism against muslims, to people from different nationalities religions and colors, to Zainab's fight for justice for herself and others, I think she would be an amazing lawyer. The book is good, but for some reason I didn't love it as much as I hoped I would.

This book was heartbreaking, hopeful and beautiful. The uncertainty of senior year/first year of college is made even more fraught by Zaneb’s battles against Islamaphobia and the injustices all around her and Adam’s battles with a new diagnosis. They each find an anchor in a Marvels and Oddities journal and the story is told primarily through their entries.

A Tale of Navigation

This story covers a lot of navigation: love, loss, hate, war, religion, moral code, and sense of self. This journey is covered by journal entries of Adam and Zayneb, but they stray from a typical journal format because they review a moments' marvels and oddities. The protagonists are thoughtful and dedicated teens that challenge and inspire each other regularly in a relatively short amount of time, which creates a good foundation for their romance. Their religion plays a prominent role in the story, but not in a straying from it, but rather their refreshing commitment to it. A wonderful listen, I enjoyed most every minute of it.

Much more than teenage love story

The only teenage love story I read/listened to where I learned so much more! Discussing difficult topics like MS and islamophobia, there is so much depth and self awareness in the 2 main characters, that I showed me how little I know and how much more I want to learn...