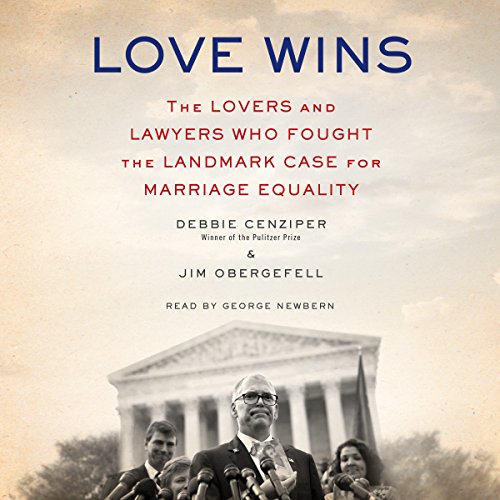 The Lovers and Lawyers Who Fought the Landmark Case for Marriage Equality
By: Debbie Cenziper, Jim Obergefell
Narrated by: George Newbern
Length: 8 hrs and 10 mins
Categories: History, Americas
4.8 out of 5 stars 4.8 (72 ratings)

By: Debbie Cenziper,Jim Obergefell
Narrated by: George Newbern
Free with a 30-day trial

The fascinating and very moving story of the lovers, lawyers, judges, and activists behind the groundbreaking Supreme Court case that led to one of the most important national civil rights victories in decades: the legalization of same-sex marriage.

In June 2015, the Supreme Court made same-sex marriage the law in all 50 states in a decision as groundbreaking as Roe v Wade and Brown v Board of Education. Through insider accounts and access to key players, this definitive account reveals the dramatic and previously unreported events behind Obergefell v Hodges and the lives at its center. This is a story of law and love - and a promise made to a dying man who wanted to know how he would be remembered.

Twenty years ago Jim Obergefell and John Arthur fell in love in Cincinnati, Ohio, a place where gays were routinely picked up by police and fired from their jobs. In 2013 the Supreme Court ruled that the federal government had to provide married gay couples all the benefits offered to straight couples. Jim and John - who was dying from ALS - flew to Maryland, where same-sex marriage was legal. But back home, Ohio refused to recognize their union or even list Jim's name on John's death certificate. Then they met Al Gerhardstein, a courageous attorney who had spent nearly three decades advocating for civil rights and who now saw an opening for the cause that few others had before him.

This forceful and deeply affecting narrative - part Erin Brockovich, part Milk, part Still Alice - chronicles how this grieving man and his lawyer, against overwhelming odds, introduced the most important gay rights case in US history. It is an urgent and unforgettable account that will inspire listeners for many years to come.

What listeners say about Love Wins

This book renewed my faith in my country and it's processes. It is easy to doubt in times like these. The love and the political process in this book showed me there is still reason to believe in the people of this country: believe in the ability to persevere through what seems to be overwhelming odds against love and common sense.

I bought this book on a whim thinking it was about something entirely else (I clearly did not read the full title) but this was a pleasant and touching surprise that I am so glad I got to listen to this book. It bounces around so I was confused in the beginning trying to keep names straight but the stories were incredible and it made me proud to be an American where love is love and it's really just that simple.

What a fantastic book...well read and written. The story line was moving and incredibly impactful to our world.

I definitely recommend this emotional and moving account of the landmark case obergefell vs hodges.

What do u say about something that highlights a moment that changed not only the world but my life as a gay man what do u say but magical ,bravo,fantastic sooo many words to say sooo much and sooo little this is an amazing book

This book delivers history, law, and the human faces of the most important Supreme Court ruling in my adulthood. The heartbreak that lead to this lawsuit shows the depths of love. I had goosebumps during the final chapters.