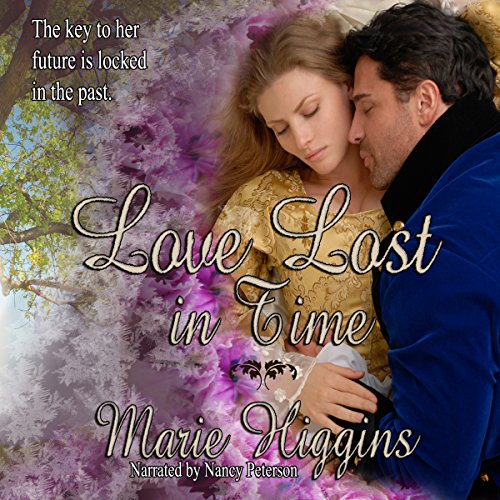 Andrew Merrick was whisked from his home in England, 1848, to another time - the very day a mob had attacked his family. Wondering why he remains in this strange place, all he wants is to find the treasure his father had hidden, hoping this might take Andrew back home. But he's running out of time. When he meets a lovely woman in this new century, he feels she is the one who will help him.

Halle Chapman has come to England to find her missing father. What she finds instead is a nice man who claims he's from the past. Although she doesn't believe in time-travel, deep in her heart, she knows she must help Andrew. What she finds instead is that discovering the key to her future lies in the past. Now, to return to her own time, she needs to solve the mystery surrounding Andrew Merrick and his family's murder.

What a delightful time travel that really pulls the reader in giving you mystery, love, and adventure. I thought it was well written and the deleterious what wonderful. It is an audio that I will listen to again. I really enjoyed how the past and future are mixed. The mystery and the unknown really had me hooked.

Ms. Peterson is becoming one of my favorite narrators. I love her voice and how she puts so much emotion into it for her characters. She really brings the story alive for me pulling me in with an audio I had trouble putting down. There are no background noises, no repeating of words, no volume changes, just a wonderful clean, clear audio that really grabs your attention. If any breaks were taken I could not tell, the deleterious is wonderful, powerful and totally delightful. I had no trouble at all picturing each scene from the thrill, confusion, excitement in my mind. Her performance as always is outstanding and one you get lost in. This narrator has a very smooth and rich voice she has no trouble pulling off each scene making you feel as if you are there. Her male voices are just as wonderful as her female’s ones. You always know what each character is feeling and just what they are going through. Her voice is one I never get tired of listening to. I am so looking forward to listening to more of her work.

Andrew is a delightful character he has mixed emotions on why he went ahead in time. Halle feels lost not knowing her father and is spending her time hunting him down. We the listener has mixed emotions with him. You have to even wonder if he is really real, than you wonder just how he is mixed up in all the mystery around him. My emotions were all over the place why listening to this audio. There is a lot of mystery, a little confusion for the characters on how the time travel is possible. I loved how that is played out from getting Halle to believe he is from the past. It really is a great plot that is well written. I look forward to getting to know more of this authors work.

This book is full of intrigue, heat and adventure from start to finish. It's a fast-paced, well written story that just takes you on a thrill ride. The heat between the characters is off the charts steamy hot. This book is a must read for sure.I highly recommend this book and series!!!

Stop swearing in front of the Duke!

Imagine that you come to England (where, as we know, utterly romantic things happen) and find a gorgeous man claiming he's from the Victorian era. He tells you of a horrible event he must prevent, and also - you two fall in love.

And then he runs out of time. You're whisked into the past without him. Now get smart, girl! You need to stop a 170 year-old crime before it happens and persuade a suspicious man that he just fell in love with you in the future.

I found this book a joy to listen to. My reasons? The narrator and the historical accuracy. Nancy Peterson is a total pro. She breathes a life into all the characters, because she does not merely read the text, she truly acts for you. And you can see that Marie Higgins loves the Victorian era and tries to draw the picture as accurately as possible. It reminds me of Georgette Heyer, great authoress who researched the Regency period extremely well.

I loved how humble Andrew got after a month of being in the present, working as staff in his own manor. Not that he was horrible before, just... well, it made me like him.

Now about the time travel.

This is a historic romance and a mystery - by which I mean that the time travel is basically a side-note, a device to move the plot forward. But as a sci-fi and fantasy reader, I have a head full of questions that would tie up loose ends. Why does Nigel do what he does in present time? What if the runaway returns? How did the time travelling device even come to be where it is? Is there a mythology behind it? Who's voice is calling Halle forth? What did the friends do? Oh, so many questions :D

But never you mind that and listen to this great romance, it has everything that will make your heart happy :)

I'm a sucker for time travel romance books. This was nice and clean, sadly no smut lol. But still very enjoyable. The characters and story sucked me in and I couldn't wait to see how it would turn out. Very sweet and fun.

Nancy Peterson as always gave a wonder performance. She made this book so much more enjoyable.

This book was truly a delight to listen to. I won't give the story away.....but it's got the feel of an old fashioned clean Victorian romance with the uncertainty of a time-travel novel. This combination can sometimes seem disjointed but this author pulls it off beautifully. She effortlessly weaves in mystery, romance and just the right amount of suspense to maintain the intrigue. The H/h characters are such kindred spirits and their romance is lovely to witness. 💏

The narrator truly makes this book excel. It is a pleasure to listen to a book where the narrator doesn't interfere with the story. Her accents and inflections are, in my opinion, impressive. She is on my short list of great narrators for sure! 😉

I enjoyed this book and recommend it to those who enjoy an adventurous romance that's full of charm and mystery.

I am grateful that the author, narrator, or publisher provided me this audiobook at no cost in exchange for my unbiased review because it was a joy to listen to.

Thoroughly entertaining and enjoyable clean romance with a bit of mystery, murder and suspense. If you like time-travel romance stories this is a really good, well written story with great characters and plot. I really liked the twist that both of the main characters time-travel. Definitely worth your time.

Nancy Peterson does a great job with the narration. Really good character voices. Pleasant voice. Clearly spoken and a smooth even pace. She was able to make the characters and the story come to life. Always enjoyable to listen to her narrate a book.

This Book has a very cool...

This Book has a very cool idea behind it!! it could've went either VERY GOOD OR VERY BAD!! THANKFULLY IT WENT VERY GOOD!!! The whole Idea is unique but I loved it!! GREAT JOB MARIE HIGGINS!! Nancy Peterson did an AWESOME JOB bringing the book to life each character Was their own & you could tell!!

I was so excited to get this book! I love time travel books and this one was awesome!! The romance was spot on and I can't wait to read others written by Mrs. Higgins! Thanks so much for the enjoyable read!!

I love historical romances and usually shy away from time travel stories but when a friend recommend this one I took the chance.

I was pleasantly surprised to find this story not only was a clean romance but had some mystery and suspense. The plot is entertaining and the narration was wonderful. This is a winner for those who like sweet Victorian romances with a twist.

Halle's character really appealed to me as she was intelligent, confident and brave. I loved how she dashed to action when the occasion warranted her help. As I listened to the story Halle felt very real to me. I liked Andrew as well but he was more like a fairy tale prince and I think that added to the charm of the story. Their romance was magical and charming and I just loved that.

There were so many scenes in this book that I enjoyed but I loved all the suspense filled scenes involving Halle and the family's enemies.The final showdown where the house is attacked is filled with danger and suspense. It had me on the edge of my seat wondering how successful Halle and Andrew were going to be in altering the family's fate.The narrator did a wonderful job of performing the characters and I found it very easy to listen to. She really brought the story to life and I got a great sense of the characters' emotions and feelings through her performance.I thoroughly enjoyed this whole book and I couldn't put it down. I'm looking forward to reading the rest of the series.

There was one very poignant and romantic scene towards the end of the book that I found quite moving.

I received a copy in exchange for my honest review.

Full of twists and turns, this book kept me enthralled all the way through. Just when I thought the plot would be explained, another layer of the story would peel back to reveal further complications. The characters are interesting and flawed, adding depth to the story. Without making this a spoiler, I did struggle a bit with the sudden happily ever after, which felt a little unrealistic.

I especially enjoyed the narration of this book. Nancy Peterson brought the characters to life, keeping true to their personal backgrounds.