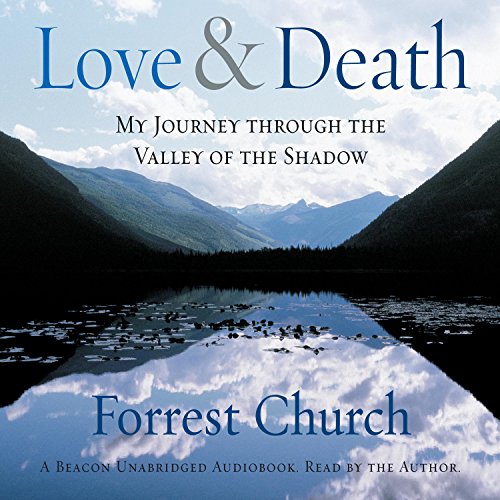 My Journey Through the Valley of the Shadow
By: Forrest Church
Narrated by: Forrest Church
Length: 4 hrs and 52 mins
Categories: Bios & Memoirs, Personal Memoirs
4.5 out of 5 stars 4.6 (5 ratings)

On a February day in 2008, Forrest Church sent a letter to the members of his congregation, informing them that he had terminal cancer; his life would now be measured in months, not years. In that remarkable letter, he wrote: "In more than one respect, I feel very lucky." He went on to promise that he would sum up his thoughts on the topics that had been so pervasive in his work - love and death - in a final book.

Church has been justly celebrated as a writer of American history, but his works of spiritual guidance have been especially valued for their insight and inspiration. As a minister Church defined religion as "our human response to the dual reality of being alive and having to die." The goal of life, he tells us, "is to live in such a way that our lives will prove worth dying for." This last book in his impressive oeuvre is imbued with ideas and exemplars for achieving that goal. The stories he offers - drawn from his own experiences and from the lives of his friends, family, and parishioners - are both engrossing and enlightening. Forrest Church's final work may be his most lasting gift to his listeners.

"I read Love & Death as soon as it came out. The greatest gift I could give every one of you is to just tell you to go read this book." (President Bill Clinton)
"Truly a gift, one that will echo in my own preaching and teaching, and in my own life as well. Like Moses gazing at the Promised Land he would not enter, Forrest Church blesses us with his eloquence, his faith, and, mostly, his love." (Rabbi Harold Kushner, author of When Bad Things Happen to Good People)
" Love & Death is transformative. I was not prepared for the power of this splendid, soaring book. It totally captured me." (Sylvia Ann Hewlett, author of Creating a Life)

Some things can last when a person dies

I've been wanting to read this since the time it was published in 2007 when I used to hear the author's sermons on the radio preaching at All Souls Unitarian in New York. His combination a forceful personality and broad acceptance of everyone appealed to me, so it was with dismay that I heard of his final terminal illness. This is at the center of this book, read by the author himself in his last months. In the first part, he discusses how he has come to view love and fear as opposite poles in human emotion, starting with his early childhood, the loss of his famous politician father, and on through adolescence and his many years of ministry. The sermon he gave the day after the September 11th 2001 disasters is included, a little jarring in the light of what the country has become since that time. In the second part, he brings us on his personal journey at the end of life, taking stock and ultimately embracing the fact that he would be leaving his family in a short time. His story is both tragic and life-affirming in the way it emphasizes what he has come to know as the most important things that endure past a person's death. He repeats his personal mantra ‘Want what you have; do what you can; be who you are' a number of times, and this is probably his main piece of original pastoral thought here. Unitarian Universalism is a religion that does not let itself be confined to Christianity, though he speaks much of christian role models he feels to have been emblematic of his theme. In the end, I think his summation of what matters at the end of life would speak to secular people coping with the same kinds of trials and search for meaning.

A Cornerstone to Universal Unitarianism

Coming from a mixed background of catholic and Baptist upbringing. I have always been intrigued by how other religions view. I have never really ha e fully subscribed to a spiritual set of beliefs more than Universal Unitarianism. After doing a little digging I found this book had been listed from many Universal Unitarianist's as a must read in understanding the foundations of what they believe and how they view this experience of life.