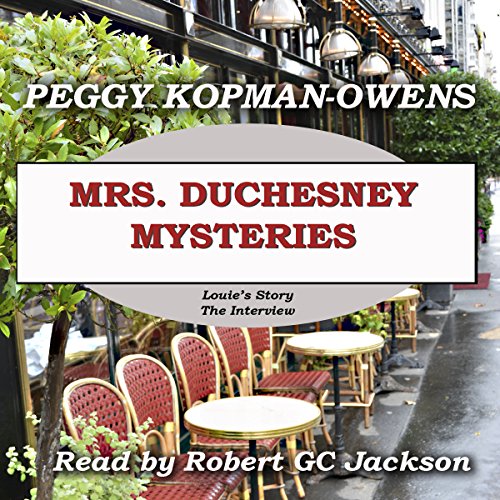 By: Peggy Kopman-Owens
Narrated by: Robert G.C. Jackson
Try for $0.00

People often ask me, "How did Louie Bertrand become a famous Paris sleuth?" For our first interview, Louie Bertrand agreed to meet me at a café at one o'clock in the afternoon for "le petit dejeuner." This should have been my first clue, for it shouted this artist turned sleuth was a "night bloomer." After our first night out together my head was still spinning. I pleaded to his amused face, "Tell me again how you and Mrs. Duchesney met... but first, please, tell me where I was last night." Monsieur Bertrand smiled, poured us both a coffee, and began, "We met during her first summer in Europe, when she was looking for something or someone to give her young life meaning. I could not have imagined then that our lives would become intertwined for thirty more summers. It was not logical in any sense that she, seventeen and more child than woman, would have such a profound influence on me a man of thirty." From my interviews, I would learn that Louie Bertrand and his sleuthing partner Mrs. Duchesney were as different as...Well, as different as Paris in the daytime and Paris at night.

What listeners say about Louie's Story: The Interview