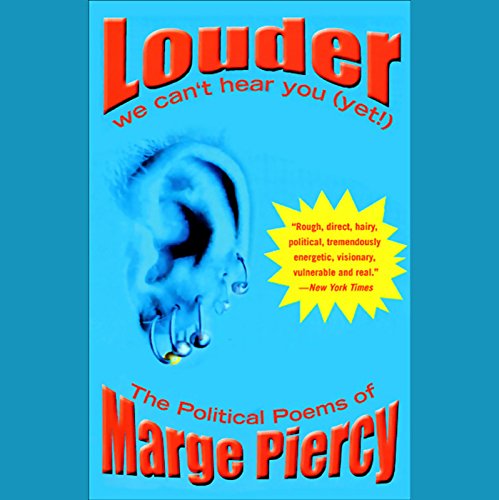 We Can't Hear You (Yet!), The Political Poems of Marge Piercy
By: Marge Piercy
Narrated by: Marge Piercy
Length: 1 hr and 2 mins
Categories: Literature & Fiction, Poetry
3.8 out of 5 stars 3.8 (12 ratings)

Scribbled on walls, e-mailed to friends, posted on the web, recited in rallies from coast to coast, Marge Piercy's political poems have become anthems for social change.

Louder, the first collection of her political poetry, brings us over sixty minutes of beloved poems in Piercy's own voice. Performing old favorites such as "To be of use," "For strong women," and "The low road;" as well as new ones including "No one came home," an elegy for 9/11, "Choices," about the occupation of Iraq, and "Sneak and Peek," her hilarious response to the Patriot Act, Piercy delivers 26 poems that give voice to our outrage, our passion, our utter disbelief and desire for peace.

Marge Piercy's reading style is powerful and unique; her poetry readings are often standing-room-only events. She has performed at venues around the world, from the Library of Congress and New York City's Public Theater to the Institute for Contemporary Art in London and at over four hundred universities nationwide. Louder, We Can't Hear You (Yet!) includes some of her most oft-requested poems, such as the deeply moving "Rape poem" and "For two women shot to death in Brookline, Massachusetts," as well as the very funny "What's that smell in the kitchen?" and "Report on the fourteenth subcommittee on convening a discussion group."

"Her poems are rough, direct, hairy, political, tremendously energetic, visionary, vulnerable and real....No other poet of this generation has more consistently identified herself with the political and social movements of her own times." (Margaret Atwood, The New York Times Book Review)
"For anyone interested in what's been happening on the cutting edge during the past two decades, she's clearly essential reading." (The New York Times)

What listeners say about Louder

The above words give a more than adequate description to this book. The author is the South end of a North Bound Horse