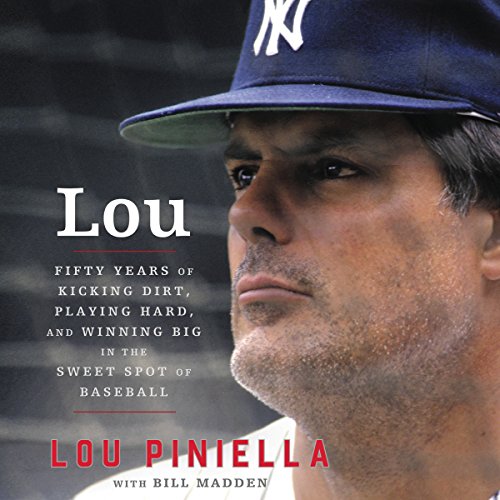 By: Lou Piniella,Bill Madden
Narrated by: Johnny Heller
Try for $0.00

In this candid, revealing, and entertaining memoir, the beloved New York Yankee legend looks back over his nearly 50-year career as a player and a manager, sharing insights and stories about some of his most memorable moments and some of the biggest names in Major League Baseball.

For nearly five decades, Lou Piniella has been a fixture in Major League Baseball, as an outfielder with the legendary New York Yankees of the 1970s, and as a manager for five teams in both the American and National leagues. With respected veteran sportswriter Bill Madden, Piniella now reflects on his storied career, offering fans a glimpse of life on the field, in the dugout, and inside the clubhouse.

Piniella speaks from the heart about his teams and his players, offering a detailed, up-close portrait of the Bronx Zoo's raucous personalities such as Reggie Jackson and Catfish Hunter, as well as his close friendship with Thurman Munson and his unusual relationship with George Steinbrenner. He also delves deep into his post-Yankee experiences, from winning a World Series for the controversial owner of the Cincinnati Reds, Marge Schott, to transforming the perennial cellar-dwelling Seattle Mariners into one of the league's best teams. Some of the game's brightest stars are here: Ken Griffey Jr, Randy Johnson, and Alex Rodriguez, Piniella's supremely talented and controversial protégé.

Throughout his time in the majors, Piniella has witnessed MLB grow into a multi-billion-dollar business. Piniella reflects on those changes, voicing his highly critical opinions on a range of controversial subjects, including steroids. Hilarious and uproarious, Lou brings into focus a man whose deeply rooted passion for baseball has defined his life.

What listeners say about Lou

this is a great book to listen to when traveling. each chapter stands alone, so you can listen on short trips as well as longer travel.

This was a must listen as a Reds fan. Lou’s years at Cincy were exciting, and such a great story.

If you could sum up Lou in three words, what would they be?

I liked the first person account of the book.

Have you listened to any of Johnny Heller’s other performances before? How does this one compare?

I can't answer, because I have not heard other narrations.

Every time I hear an autobiography, I love to listen to an author write in the first person. Even if he, or she has another author co writing the book, as is the case of this book, you can always be sure that the person who narrates the story has approved everything the co writer has typed. I call your attention to other baseball autobiographies. Pedro, Francona the Red sox years, ball player, and the yankee years as good examples of novels like this one. I would also direct your attention to chapter sixteen of this book. In this chapter, Lou gives his thoughts on the current state of baseball, and some of the new rules that have been put in place.