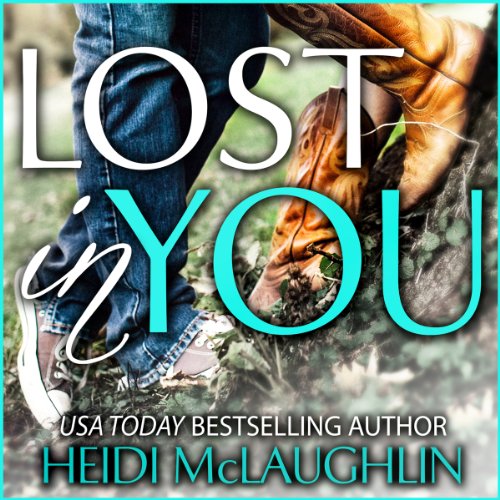 By: Heidi McLaughlin
Narrated by: Jordan Leigh,Kristin Allison
Try for $0.00

Ryan Stone is a less-than-average teenager. He doesn't have fancy clothes. He doesn't carry around the latest smartphone and he definitely doesn't have an MP3 player. Instead, he goes to school, does his chores, and dreams of a new life away from Brookfield where he's expected to follow in his blue collar family's footsteps.

Hadley Carter is America's Pop Princess. A successful recording artist living her dream with a sold-out tour and a handful of Grammy's there isn't much that she wants for, except love. But finding love on the road is near impossible when all she longs for are romantic dinners, a nighttime stroll on the beach, and holding hands with someone who isn't going to exploit her.

When a chance encounter introduces Ryan to Hadley, will he be like her adoring fans looking for a way in? Or will it be Hadley who pursues Ryan even though it might cost her the only career she's known.

Lost in You is a story about following your dreams, taking risks and getting lost in love.

What listeners say about Lost in You


I am conflicted about this book mostly because it is not my usual cup of tea.
I enjoy May- December romances but I prefer when the man is older. This was still a good book though. I believe the author did a very good job of capturing the angst that comes along with first love.
Worth the credit.

This book had a lot of problems for me. First problem being the female voice wait too old for the person she's playing. Second is his major age difference. Really hard for me to get used to that and except it I understand later in the book and I like the ending I don't know this home is just hard. I did ask for my credit back.

So much whining but I guess it's to be expected

The narration was very good but by mid story I was getting pretty annoyed with the narrator's whining voice. Granted, the character Ryan was going through heart wrenching anguish but it was almost enough to make me turn the book off.
Overall, the story was an interesting enough rendition of star-crossed love. The ending was predictable and in comparison to the action within the body of the story, somewhat of a let down. I felt the last few chapters simply punched out what we all expected to happen in the end without any drama. In the end, it was good brainless listening.

If you could sum up Lost in You in three words, what would they be?

Without a doubt it was Ryan Stone. I never thought I would say this because I love my bad boys, but it was nice having a hero that didn't do something to jeopardize the relationship with the heroine. Ryan was sweet, shy and terribly cute. He didn't own a cell phone, didn't listen to music, never broke curfew and attended church every Sunday. Until meeting Hadley just a few months shy of his 18th birthday, Ryan had never even kissed a girl!. Roles were definitely reversed in this story.

I've listened to the last 4 chapters at least 5 times so I would definitely have to say the reunion was my favorite.

She was 22 and America's Princess of Pop. He was 17 and didn't own a radio. Can love survive the impossible?

This story is New Adult at its finest. Holly. McLaughlin defied all the conventional expectations that define this relatively new sub-genre of romance and not only made the unusual premise seem quite normal but did it with compassion and a genuineness that makes "Lost In You" worth no less than 5 stars. Add the dual POV narrated by awesome newcomers Jordan Leigh and Kristin Allison and you've got an audiobook that all romance lovers should have at the top of their wish lists!

Not new adult and not as good as Forever My Girl. More young adult. Still love Heidi McLaughlin.

Lots of Feelings being talked about

Would you try another book from Heidi McLaughlin and/or Jordan Leigh and Kristin Allison ?

Yes, I have read other books by Heidi McLaughlin and loved them.

The best part of the story was at the end when the were a bit older. The part I didn't like about the book and made me give it a 3 was that all they talked about was their feelings. Each chapter usually went from Hadley's POV to Ryan's POV and that's all each of them babbled on about what how they were feeling and what they thought the other was feeling.

was when they saw each other in the bar after 4 years.

Did Lost in You inspire you to do anything?

If you could sum up Lost in You in three words, what would they be?

True love tested to the limit.

This story has everything a reader is looking for in a romance novel.

What about Jordan Leigh and Kristin Allison ’s performance did you like?

The narrators did a super job. Very pleasant voices.