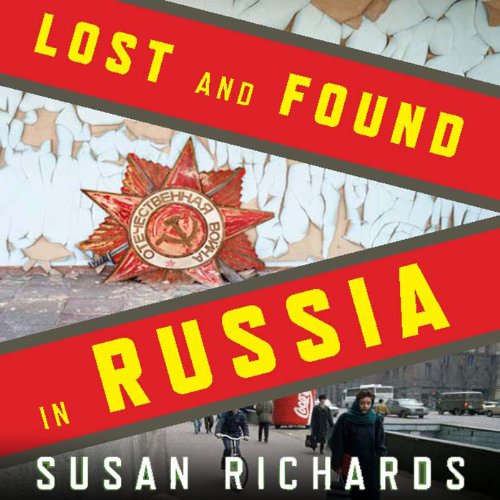 Lost and Found in Russia

By: Susan Richards
Narrated by: Lynne Jensen
Try for $0.00

After the fall of communism, Russia was in a state of shock. The sudden and dramatic change left many people adrift and uncertain—but also full of a tentative but tenacious hope. Returning again and again to the provincial hinterlands of this rapidly evolving country from 1992 to 2008, Susan Richards struck up some extraordinary friendships with people in the middle of this historical drama. Anna, a questing journalist, struggles to express her passionate spirituality within the rules of the new society. Natasha, a restless spirit, has relocated from Siberia in a bid to escape the demands of her upper-class family and her own mysterious demons. Tatiana and Misha, whose business empire has blossomed from the ashes of the Soviet Union, seem, despite their luxury, uneasy in this new world. Richards watches them grow and change, their fortunes rise and fall, their hopes soar and crash.

Through their stories and her own experiences, Susan Richards demonstrates how in Russia, the past and the present cannot be separated. She meets scientists convinced of the existence of UFOs and mind-control warfare. She visits a cult based on working the land and a tiny civilization founded on the practices of traditional Russian Orthodoxy. Gangsters, dreamers, artists, healers, all are wondering in their own ways, “Who are we now if we’re not communist? What does it mean to be Russian?” This remarkable history of contemporary Russia holds a mirror up to a forgotten people. Lost and Found in Russia is a magical and unforgettable portrait of a society in transition.

What listeners say about Lost and Found in Russia

The book poses good questions about the identity crisis posed by the demise of the USSR. This is the "lost" part of the title. The answers - the "found" part - are sketchy and lacking coherence. The author sets out to prove the idea that Russia cannot be understood through reason alone, and proudly provides evidence to justify the view. She may well be right, but the evidence adduced often has a contrived feel to it. It is unclear why the author sets out to investigate the question. No context is provided for the 1000s of kms she covers. She comes over as a prosperous Westerner having jolly jaunts here and there. The friends she describes come over as caricatures rather than complete people, and her relationship with them sometimes recalls that between lab technician and a cage of mice! The author is way too much to the fore, continually commenting on how she feels about people and situations rather than allowing the readers to draw their own conclusions. The narration is the worst of several hundred Audible titles I have listened to. The narrator attempts a Russian accent and it sounds like a cross between Scottish and Jamaican!