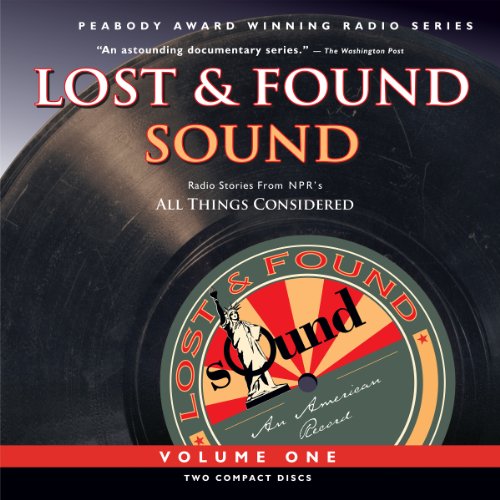 Lost and Found Sound, Volume One

Lost and Found Sound, Volume One

A dozen stories from the Peabody Award-winning radio series, Lost and Found Sound, heard throughout 1999-2000 on NPR's All Things Considered. The series producers, The Kitchen Sisters (Davia Nelson & Nikki Silva) and Jay Allison, started with an idea of a radio series exploring how sound has captured and shaped American history and how the sound of our lives has changed over the last 100 years. Culled from more than 60 stories, this first compilation includes: "Tony Schwartz: 30,000 Recordings Later"; "Gettysburg Eyewitness"; "Cigar Stories" (narrated by Andy Garcia); "Carnival Talkers"; "Sound Restoration"; "LBJ and the Helium-Filled Astronaut"; "Listening to the Northern Lights"; "The Partridge Family Grand Tour"; "Tennessee Williams: The Pennyland Recordings"; and more.

"These people are possessed. By sound. This is the most wonderful collection. The rich, rewarding sounds of life that might otherwise have escaped us. The sounds of the street and the soul." (Peter Jennings, ABC News)

Settle in and listen...

This is a rather motley collection of "sound pieces," or as I've been known to say, 'sound stories.'

Together, I think it makes for excellent listening. I believed so strongly in this I gave away copies to friends and family for a holiday gift I thought everyone would get something out of.

To the person that wrote the rather brief blistering review of this CD set -- mentioning only in first sound story of an excentric New Yorker who recorded sounds -- I suggest listening a little further beyond track one. The bit on "space noise" seems to be everyone's favorite.

This is art and public radio and collaboration at its very best. A beautiful collection of stories built from bits of tape and all-but-forgotten recordings, these delicately crafted tales offer a glimpse into the lives of those who were recorded, as well as those who delivered the tape from attic or archive to the capable hands of the Kitchen Sisters. Both familiar and surprising, a must-have for lovers of sound and story.

I do not know in what way this selection was intended to be of interest, but it is not. This is the biggest waste of money in my
5-year of Audible membership. It is a collection of street noises set against an ever-returning and wholely annoying piece of music.
Don't bother.