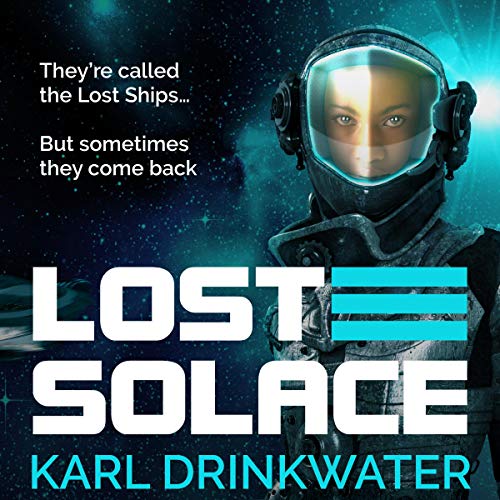 By: Karl Drinkwater
Narrated by: Marisha Tapera
Try for $0.00

Sometimes spaceships disappear with everyone on board - the Lost Ships. But sometimes they come back, strangely altered, derelict, and rumoured to be full of horrors.

Opal is on a mission. She's been seeking something her whole life. Something she is willing to die for. And she thinks it might be on a Lost Ship.

Opal has stolen Clarissa, an experimental AI-controlled spaceship, from the military. Together they have tracked down a Lost Ship, in a lonely nebula far from colonised space.

The Lost Ship is falling into the gravity well of a neutron star, and will soon be truly lost... forever. Legends say the ships harbour death, but there's no time for indecision.

Opal gears up to board it. She's just one woman, entering an alien and lethal environment. But perhaps with the aid of Clarissa's intelligence - and an armoured spacesuit - Opal may stand a chance.

What listeners say about Lost Solace

Sometimes ships mysteriously disappear in space, marooned amongst the stars, cut off from all forms of communication, their whereabouts unknown. But sometimes…sometimes, these lost ships come back.

Such is the premise of Karl Drinkwater’s Lost Solace, which finds former military grunt, Opal, hijacking an experimental ship and hacking its AI in order to recover one of these lost vessels. What she finds, though, is not entirely what she expects. The lost ship has been altered in odd ways, an alien fungus clinging to its interior walls, and the odd feeling of…something…a presence inhuman. Finding herself aboard an otherwise desolate ghost ship is one thing; being pursued by the military looking to recover their stolen ship and court martial her on all kinds of various charges is another, a particular complication she doesn’t need but must contend with. Or die trying.

Drinkwater layers Lost Solace with a number of mysteries, first and foremost being the secrets behind the derelict cruise liner, both its disappearance and its transformation. But there’s also the question of why Opal stole the specific ship she did, why the military is so desperate to get it back, and why she has reprogrammed the ship’s AI to model a woman named Clarissa.

Surrounding all these mysteries is plenty of action. Every step of Opal’s journey is complicated further and further by outside forces, and it’s always interesting to see what the author has up his sleeve to force his protagonist into a position of struggle. Drinkwater excels at making Opal struggle, wrinkling every one of her plans with unexpected dangers and opposition.

Thankfully, Opal is up to these challenges. She’s an intelligent and resourceful heroine, one who relies on her brains just as much as, if not more-so than, her brawn. She’s smart and bold, and Drinkwater constantly keeps you guessing how she’s going to get out of whatever particular corner she’s been boxed into. Clarissa is an excellent counterpart, both friend and ally, to Opal, and their relationship develops a richness the more it deepens, borne initially out of a fight for survival, but also a mutual admiration and respect. As an artificial intelligence, Clarissa is clearly smarter than Opal thanks to raw processing power, but both find ways to complement each other in both skills and brains.

Complementing the material nicely is Marisha Tapera, who reads Lost Solace with solid efficiency. She has a good vocal range, giving Opal, Clarissa, Clarissa’s unhacked default AI mode, and the various tertiary characters that weave in and out of the story their own distinct voices and characteristics. There’s no mistaking one character for another. Her Opal has a confident authority befitting her skills and military tenure, whereas her Clarissa is very young, almost childish in tone, which helps to emphasize the relationship between these two figures marvelously.

Lost Solace is an intelligent work of science fiction, one that is quite literally built around the brain of its smart, highly adept female (or female-identifying in the case of the AI) protagonists. It’s packed with plenty of action, to be sure, but it’s much, much smarter than your typical run-and-gun sci-fi romp.

Story opens simply and seemingly mundane,but then smoothly escalates into much intrigue and continuous action. Has a very good ending but not an ending, demanding a sequel!
I would recommend this audiobook to ages 12 and older due to tense situations.
I was given this audiobook for free, and freely give my evaluation.

I thoroughly enjoyed this book and hope that there will be more from within its universe.

Even though it's 'only' 7 hours, those hours are filled with a great Sci-fi story that incorporates a bunch of suspenseful horror elements that work well together. There are no unnecessary parts that are only there to create forced drama or a ham-fisted twist and the author does a great job in keeping the techno babble to a minimum.

The narrator does a great job giving the characters distinct voices which makes the story and characters easy to follow.

All in all a solid sci-fi story with great narration. A great choice for a few hours of space entertainment.

It left me wanting more

I don't listen to a lot of sci fi books, for me they are "a change of pace" from my usual fare of horror thrillers or light comedies. This was my first time listening to anything by Karl Drinkwater and I can honestly say I really enjoyed it.

The narrator does a great job and the story is well written although the ending left me hanging. I'm hopeful there's going to be a sequel so I can see what happens next.

Sublime and very satisfying. I loved it.

I highly recommend both this author, Narrator and this book. Now for the obligatory: "I was given this free review copy audiobook at my request and have voluntarily left this review."

I listened to the audiobook version of this and very much enjoyed it. The story was not your average sci-fi, and I found myself really caring for both the human and AI characters even though they're so much different from me. The world its set in feels very rich and I got a good sense of Opal's backstory, which was very cool. Feels like it should be a series and that there could even be a prequel.

Content notes: there was some language, battle violence and slight horror aspects, aliens, some very creepy ...erm... dolls of a sort (my least favorite part of the story), some very bad dudes making threats, etc.

All in all, I very much enjoyed this story, and the narrator TOTALLY nailed it. Excellent acting, differentiating the AI voices and stuff. Super great job!

I look forward to listening to this one again...

This is a very intriguing story that held me from the beginning. The main characters are women that are not weak and fumbling or overly masculine in order to survive. Lost Solace is a well balanced story of two women (or a woman and an AI life form) struggling to stay alive and working toward a goal. With characters that draw you in and make you care about them.

The pacing and narrating (narrated by Marisha Tapera) only add to this well written story and had me totally absorbed by the second chapter. The narrator skilfully voices each character and pulls you into a world of deep dark space. One I admit I loved entering. For anyone looking for a story with a strong female lead, look no further.

I really enjoyed this audiobook and I must say I look forward to the continuation of the story.

I was given this free copy audiobook at my request and have voluntarily left this review.

This was a really good sci fi book. It definitely felt like it could be longer, but it is very good. Adding a bit more background to the world building, and this would have been an incredible book. Like I said, as is, it is actually very good. It would just be that one little push into the next level for me. The narration is done well. I am really looking forward to the next in this series.

Only pure focus keeps you going in the darkness.

There is a legend, denied by the authorities, that sometimes ships will disappear later to reemerge, changed. The Lost Ships. Following one such rumour, Opal steals an experimental vessel making alterations to the onboard AI, and heads out into far space in search of what might be there and finds what appears to be the luxury passenger liner, The Solace, lost 14 years before, hanging seemingly dead and lifeless, already caught on the edge of the gravitational pull of a neutron star. Something about it, however, is odd as Opal prepares to try to gain access to explore.

This thrilling and claustrophobic novel is unusual in that, essentially, there are only two characters, Opal herself and the modified AI of her stolen ship, who she has named Clarissa. Any other appearances are very few and brief. The story is told through the conversations between these two main protagonists, their evolving relationship and the battles to survive. Marisha Tapera narrates, her lovely voice building tensions and excitement as well as character building as she very closely follows the nuances of the text in pacing, intonation and tonal variation. A superb performance.

One oddity noted is the numbering of the chapters which work not from one to twenty eight but in reverse from twenty eight to one, completely omitting chapter number eighteen. Whether this is a simple mistake, although I doubt this, or there is a significance I failed to unravel, it added a tiny frisson to the strangeness of the book.

This is the first novel from author, Karl Drinkwater, that I have read and it certainly wi!l not be the last. I am truly grateful to the rights holder of Lost Solace who at my request, freely gifted me with a complimentary copy, via Audiobook Boom. It is one of those very occasional books to which I wish I could award an additional star of excellence beyond the normal five star rating. The story was intense and involving, a perfect melding of book and narrator, and though complete in itself, left me wanting more.
Excellent, and recommended to anyone with a S.F. leaning.

VERY GOOD IN PARTS A BIT DRAGGED OUT WITH FILLER IN OTHERS,OVERALL ENJOYED THIS BOOK THOUGHT THE OVERALL IDEA INTRIGUING,COULD HAVE BEEN CONDENSED DOWN TO IMPROVE THE SUSPENSE.