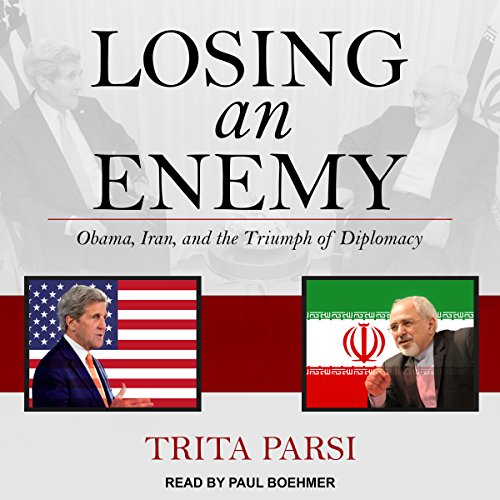 By: Trita Parsi
Narrated by: Paul Boehmer
Try for $0.00

This timely book focuses on President Obama's deeply considered strategy toward Iran's nuclear program and reveals how the historic agreement of 2015 broke the persistent stalemate in negotiations that had blocked earlier efforts.

The deal accomplished two major feats in one stroke: it averted the threat of war with Iran and prevented the possibility of an Iranian nuclear bomb. Trita Parsi, a Middle East foreign policy expert who advised the Obama White House throughout the talks and had access to decision-makers and diplomats on the US and Iranian sides alike, examines every facet of a triumph that could become as important and consequential as Nixon's rapprochement with China.

Drawing from more than 75 in-depth interviews with key decision-makers, including Iran's Foreign Minister Javad Zarif and US Secretary of State John Kerry, this is the first authoritative account of President Obama's signature foreign policy achievement.

"An astute and generous portrayal of both sides of the negotiating table." ( Kirkus)

What listeners say about Losing an Enemy

thorough, balanced, well researched insider perspective. puts in perspective what has been thrown away by the current administration

Comprehensive, insightful and well researched. Loved it. A deep dive into the intricacies of international diplomacy.

A lot of good info but biased

The author fails to mention the reasons for Iran's reputation, it's acts of terrorism, the reasons for America's mistrust, and the many lies and deceptions it has engaged in with the IAEA. This book is not totally biased, I'd say about 75% biased. One needs more than this to understand the full picture.