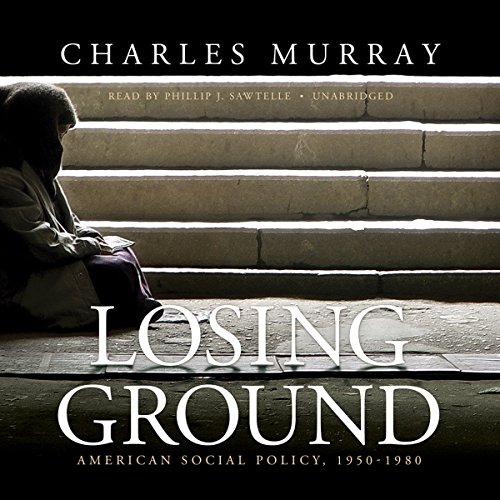 By: Charles Murray
Narrated by: Robert Morris
Try for $0.00

Beginning in the 1950s, America entered a period of unprecedented social reform. This remarkable book demonstrates how the social programs of the 1960s and ’70s had the unintended and perverse effect of slowing and even reversing earlier progress in reducing poverty, crime, ignorance, and discrimination. Using widely understood and accepted data, it conclusively demonstrates that the amalgam of reforms from 1965 to 1970 actually made matters worse.

Why? Charles Murray’s tough-minded answers to this question will please neither radical liberals nor radical conservatives. He offers no easy solutions, but by forcing us to face fundamental intellectual and moral problems about whom we want to help and how, Losing Ground marks an important first step in rethinking social policy.

Charles Murray is the W. H. Brady Scholar at the American Enterprise Institute. He first came to national attention in 1984 with Losing Ground. He received a bachelor’s degree in history from Harvard and a doctorate in political science from the Massachusetts Institute of Technology. He lives with his wife in Burkittsville, Maryland.

"Without bile and without rhetoric it lays out a stark truth that must be faced." ( Business Week)
"A great book." ( Wall Street Journal)
“A remarkable book. Future discussions of social policy cannot proceed without taking the arguments and evidence of this book into account.” (James S. Coleman, University of Chicago)

What listeners say about Losing Ground

A great book ruined by a terrible recording

Nobody - this is completely unlistenable

Charles Murray's incisive unpacking of statistics is able to illuminate broad social trends in ways that laymen can understand.

Recording levels are much too high! The audio regularly peaks, going from inaudible to painful in the same sentence. Worse, there is someone else in the room talking!

No, this was unprofessional and embarrassing.

Where does Losing Ground rank among all the audiobooks you’ve listened to so far?

What was one of the most memorable moments of Losing Ground?

Trying to be a human compressor in order to interpret the spoken word.

Would you be willing to try another one of Robert Morris’s performances?

yes, so long as he used a different recording engineer and/or studio

What did you love best about Losing Ground?

What a great book. I enjoyed the pace of the narration, not too fast or slow, understandable. About the book: Having lived through the events depicted, I found myself feeling as though I was tied down, watching a small child crawl slowly to the edge of a cliff, helpless to save him. I'm now listening to his book "Coming Apart".

If you don't like statistics this book isn't for you. That said, "Losing Ground" is a very compelling sociology book and a great argument against big government programs that make liberals feel good but do little to improve the plight of the poor and under-privileged. However, as an audiobook it falls short. Mostly because it lacks the graphs making it difficult to digest the data being analysed, but also due to distractions in the performance. Robert Morris reads this books as though he is completely bored with it. At times he shows inflection but overall it is a flat read.

Mr. Morris' read, however, is quite tolerable compared to his sound engineer. Throughout the book we can hear the engineer answering the phone or conversing with visitors and perhaps giving Morris cues. At some points I could understand some of what he was saying, especially when he answers the phone (no ring just, "hello"). He is never silent for more than a few minutes, I think I timed a 30 minute stretch where his voice was not heard. This I found to be an intolerable situation and the reason I could not enjoy the book.

This book is so important. I'm going to be subjective and say it's probably one of the most important that I've finished in my quest for a more complete understanding of why our country is the way it is today in regards to our societal decay amongst minorities. It's all meat, all potatoes. I had no intention whatsoever of learning about who LBJ was, what he was like, or the way he treated people. I honestly don't care. I wanted to know specifically what social policies he championed and their affects. This book delivered.

Either the reader is a problem or the audio quality is very bad. Someone needs to retool or just re-record this book.

Very interesting book and relevant in 2021

Thoroughly researched, this is a great explanation of what Murray sees as the reasons for the outcomes of low income Americans. Worth a read.

Always an interesting and thought provoking read, Murray turns economic and social policy on it's head and we all know it will never happen because the real politicians don't have the courage.

Would you listen to Losing Ground again? Why?

Yes, I would like to commit to memory many of the analyses and figures.

This is a compelling argument to rethink our entire social policy system. I have been casting about for fixes all my life and failed to understand the fundamental assumptions underlying our treatment of the poor and how insidious they have been.

although this is a somewhat older examination of the welfare state in the United States, it still offers cutting analysis that is still relevant to this day.