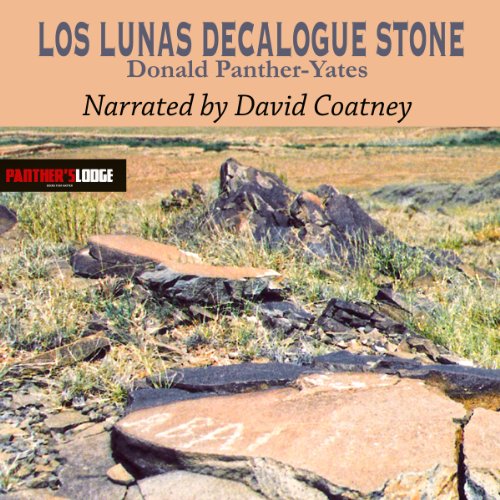 By: Donald N. Panther-Yates
Narrated by: David Coatney
Try for $0.00

On the edge of the Isleta Indian Reservation in the foothills of New Mexico lies the Decalogue Stone, a giant boulder inscribed with the Ten Commandments in Phoenician Hebrew characters. The Indians, Spanish and Americans knew of its existence, and the nearby Crypto-Jewish community of Los Quelites venerated it, building a secret altar that the Spanish Inquisition smashed and destroyed.

For the first time, in this unique monograph, the Decalogue Stone's true origin is revealed in a connection to a forgotten eighth-century Jewish colony in the American Southwest known as Calalus. If you are interested in Christianity, Judaism, Native American traditions, Southwest history or archeology, this book by an expert in epigraphy and historical monuments will fascinate you!

Quetzalcoatl’s Cave and the Mysterious Stone

What could these two places possibly have in common? Donald Panther-Yates takes us on a personal hike to visit these sites in New Mexico. Deep off the beaten path in New Mexico is the Los Lunas Decalogue Stone that is encrypted with the Old Testament version of the Ten Commandments. Written in ancient Hebrew script, it has been dated to 1000 BCE thereabouts.Its location is known to very few. There are no maps nor directions given on how to find it. You have to know someone to take you there. Despite that the Stone has been desecrated since his visit. How sad such a thing occurs. But there are many reasons this happens and has been repeated centuries since such finds because Academic Folks, and other Activist just don’t want to admit that seafaring people have been visiting our continent for 100s and 1000s of years.

Yates takes us through an unlikely and unknown history of the Phoenicians. Minoans and Romans. Their knowledge that our lands were here. The Trade among Ancient Europeans and Ancient Americans. Chapter 2, on p12 “The facts pouring in from every side bring us to the… general conclusion that ancient American civilization was stimulated by transoceanic contacts from the east and west, among them contacts with the Mediterranean were especially creative”.

Besides taking us to the Southwest, In Chapter 5, Yates takes us among the Maya, one of the earliest Indians with a written language. They used Phoenician Scripts. One of their Myths are about a bearded white man with a “wizard” (pointed hat) who came among them and brought culture. He was called Quetzalcoatl (feathered serpent). He is illustrated in their temples. He promised to return, so the Maya were forever looking for him. When the Spanish first came they made a grave error in thinking they were represented by him, losing their culture and world altogether. Other writers have speculated and wrote about this being Prince Madoc and his expeditions.

Anyway, Yates and his wife Teresa take us on a hike to the Bandelier National Monument
To Quetzalcoatl’s Cave. There are signs it is his tomb. Could it be? Yates tells us more about this characters legends. In addition he discusses Maya’s Jewish apparent Jewish connections.

Other places he visits is Chaco Canyon and describes the Clovis culture in New Mexico and the South. I found it interesting. I visited some sites around Sedona, AZ myself. You can find 7 National Parks within driving distance. There are Pueblo ruins, petroglyphs, Canyons, and Anastasia Ruins. I visited Canyon de Chelly on the Navajo Reservation. There is much hidden history in the Southwest’s Canyons.

I find Donald Panther-Yates Writings informative, enlightening and personable! This is one of my favorite books since I can imagine the places and the landscapes in an area that I have visited; places full of the marks of the Ancients. Photos are included in the Print version of the book.

Very interesting ideas!! I think I need to order this book in print so I can see the pics. T

Would you try another book from Donald N. Panther-Yates and/or David Coatney?

Would you ever listen to anything by Donald N. Panther-Yates again?

I guess I should have returned this book immediately. I lived for a time near Los Lunas, and I knew that the first European settlement from Spain, coincided with the Spanish Inquisition. That might have led to possible emigration of Jews to New Mexico at a very early date. The 8th century? Please! I have just 2 words: Small and Pox.So what did happen to the indigenous populations in the years following 1492 would have happened in the 8th century! Enough said.