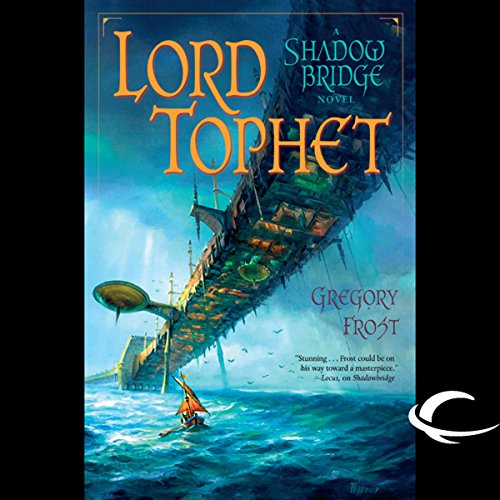 Daughter of the legendary shadow-puppeteer Bardsham, Leodora has inherited her father's skills...and his enemies. Together with her manager Soter, keeper of her father's darkest secrets, and a gifted young musician named Diverus, Leodora has traveled from span to span, her masked performances given under the stage name Jax, winning fame and fortune.

But Jax's success may be Leodora's undoing. Years ago, following a performance by Bardsham, the vengeful god known as Lord Tophet visited a horrific punishment upon the span of Colemaigne and its citizens, a reprisal inflicted without warning or explanation. And as the genius of Jax gives rise to rumors that Bardsham has returned, Lord Tophet takes notice and dispatches a quintet of deadly killers to learn the truth behind the mask.

Now, upon the cursed span of Colemaigne, where her father achieved his greatest triumph and suffered his bitterest tragedy, Leodora is about to perform the most shocking story of all.

Lord Tophet is the completion of a two-book adventure.

"The world of Shadowbridge continues to charm and bedazzle, and Frost's imagination remains as capable as ever of delivering surprises. GRADE: A-." (scifi.com)

What listeners say about Lord Tophet

I enjoyed both books, however the author could have explored the world far more. The final book was short; it would have been nice to hear more about certain conclusions, but it worked for the story format he was conveying.

I enjoyed the book but hated the ending...

Many people didn't like the first of these two books, but I really enjoyed all the stories used to tell the tale. So I was really looking forward to the sequel. All was going pretty well until I got to the end. I won't spoil it for you, but suffice to say that it felt - inconclusive and I HATE it when authors leave loose ends. The many fables and myths used to create atmosphere and history for the characters and the settings were inspired and clever. Overall, I liked this book as well as the prequel.