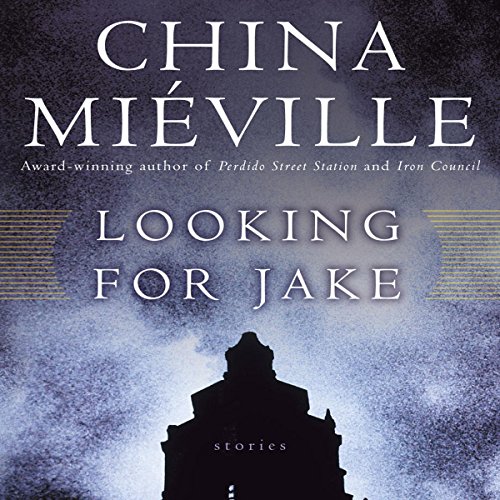 “Miéville moves effortlessly into the first division of those who use the tools and weapons of the fantastic to define and create the fiction of the coming century.” (Neil Gaiman)

What William Gibson did for science fiction, China Miéville has done for fantasy, shattering old paradigms with fiercely imaginative works of startling, often shocking, intensity. Now, from this brilliant young writer comes a groundbreaking collection of stories, many of them previously unavailable in the United States, and including four never-before-published tales - one set in Miéville’s signature fantasy world of New Crobuzon. Among the 14 superb fictions are:

“Miéville moves effortlessly into the first division of those who use the tools and weapons of the fantastic to define and create the fiction of the coming century.” (Neil Gaiman)

What listeners say about Looking for Jake

I've only recently started reading China Mieville, but he's become a fast favorite. While many of these short stories share themes, each comes at the concepts from different angles and avoids feeling redundant.

I'm not too sure why no one else has yet to write a review for "Looking for Jake" by China Miéville. I first got introduce to this author from my friends five months ago and I can't wait for more. This is just one of these authors that I would had never discover through social media. It just shows you that word of mouth has more reach than Oprah's book club.

China Miéville is the best contemporary writer that my friends has recommended.

I'm not into novellas because I find them to be too short for my mind to grasp to, but "Looking for Jake" makes you want to say "WOW" after each story.

It has a little something for everyone. Vampires for teens, sci-fi for geeks, twisted Christmas story for the change of season, and those monsters.

For anyone that knows this author, you are fully aware of what you are about to get yourself into when you open any of his books. For those who has never read anything from China Miéville, "Looking for Jake" is a great way to graze into his style, until you are ready for more.

My expectations for anything by China Mieville are very high. This collection is disappointing. It contains several good short stories, but sure seems like some half-baked early drafts for novels got thrown in to up the page count.