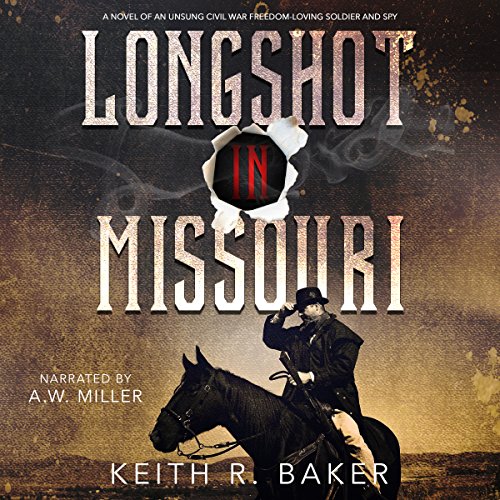 By: Keith R. Baker
Narrated by: A. W. Miller

1862 was the year that the US Civil War underwent a major ramping up. People on both sides of the fight were confused, angry, and hesitant. Most believed the 'war' would have already been over. Very few people realized to what extent the citizenry was being manipulated to participate in the country's most dividing event in its history.

In Longshot in Missouri, we meet Rob Finn - an Irish immigrant farmer living in Wisconsin - and follow him through his introduction to the grueling realities of war within a nation. Rob's unusual talents with a rifle have earned him the nickname of Longshot, together with assignments that take him to various places around the western theatre of the war. It is a physically taxing, emotional journey, on which he is sometimes surprised by the truths he learns while doing his job as a soldier and a spy.

We also meet Allan Pinkerton, thus gaining a little insight into what the beginnings of military intelligence for the United States government was like in its infancy.

Historical characters interact with our fictional hero; actual events are intertwined with the daily lives and conversations of people in those rapidly changing times. Join with Rob as he works to serve and save the things he believes to be of utmost importance, and struggles to sort out those beliefs - the true from the false - in a baffling environment.

This book is an example of a nice western that seems to be a long lost art form today. Follow along with the guy they call Longshot as he discovers the horrors of the civil war. The narration was very good and the plot was also equally good.

Would you consider the audio edition of Longshot in Missouri to be better than the print version?

I have the Kindle version but haven't yet read the ebook. After this listen I will soon though.

What other book might you compare Longshot in Missouri to and why?

In my strange mind, the movie WITNESS with Harrison Ford and Kelly McGillis. A man of the world of violence finds a brief respite in a (in this case, Shaker) simpler, peaceful community. Some readers may not see it, but... there it is.

There are several. The opening sequence where Finn is stalking a Confederate artillery officer to assassinate. The historical interplay between Finn and Allan Pinkerton (a figure I've always be drawn to learn more about). And the historical period of the U.S. Civil War as a backdrop.

If you could rename Longshot in Missouri, what would you call it?

Wish I could come up with something, sorry.

Mention of narrator A.W. Miller is needed . Great job with Irish Scottish accents. There are parts in the audio book going from straight narration to dialogue of various characters that are very well done. He added to the story with his performance.

Thank you for the enjoyable listen.

A Good Start to a New Western Series

Longshot was a nice, easy to listen to historical western. The characters were great and made for a very nice contrast between Rob and Allan Pinkerton especially with Rob being an immigrant with an amazing Irish accent. The story was pretty neat overall with the upstart of Pinkerton.

The narration by A.W. Miller was very good. His vocal skills were awesome. The accents were perfect and he had the perfect voice for the western genre. He did a super b job with this story.

I can not say enough about this book. It is one of the most interesting ones I have listened to in a long time. Didn't think I would like it at first because it was set in the Civil War era, but it completely surprised me to say the least.

It was based on a man that was an assassin and a few years in his life. The hardships that he went through and the joys of his family. Real thought provoking decisions and some others that will open your mind up and make you think.

I would recommend this to any one that wants to see where our country came from.

"This audiobook was provided by the author, narrator, or publisher at no cost in exchange for an unbiased review courtesy of AudiobookBoom dot com."

Decent for the Genre

3.5 stars really. It's ok. Great description for the time. A bit too mundane. Not as much action as you'd think but if you love Civil War and guerilla or spy-type operations of the era, you'll enjoy it.

As a student of the Civil War I found some if the story historically baffling. The preoccupation with Kirby Smith’s CS army in Kentucky, for example when it was a secondary force, and ignoring Bragg’s main army which was never mentioned.

What a combination! And what a great historical tale . . . Rob Finn (Longshot) gaining his reputation with a rifle in the Civil War, and later joining Allan Pinkerton in providing military intelligence during the war . . . while back home his wife and children are suffering from the cholera, two having died . . . Mr. Pinkerton sends Rob home to bury his children . . . only for Rob to arrive too late . . . and to find things much worse than he expected . . . for a time Rob falls into a pit of depression, that only his sharp-tongued daughter is tough enough to snap him out of . . . and afterward Rob is back to work for Pinkerton . . . one of my favorite parts of the story is when Rob is holed up with the Shakers at Pleasant Hill, Kentucky to heal and rest from injuries . . . having visited Pleasant Hill many times, its a favorite spot of mine . . . and not too far from my native home in Kentucky . . . this is a thoroughly enjoyable listen . . . don't miss it . . .

A Good Start to a New Western Series

Would you listen to Longshot in Missouri again? Why?

Yes, Longshot was a nice, easy to listen to historical western

What does A. W. Miller bring to the story that you wouldn’t experience if you just read the book?

Great job with Irish Scottish accents. There are parts in the audio book going from straight narration to dialogue of various characters that are very well done. He added to the story with his performance

If you could rename Longshot in Missouri, what would you call it?

My husband says this is a very good storyline and is well narrated too. He will be getting the next book too