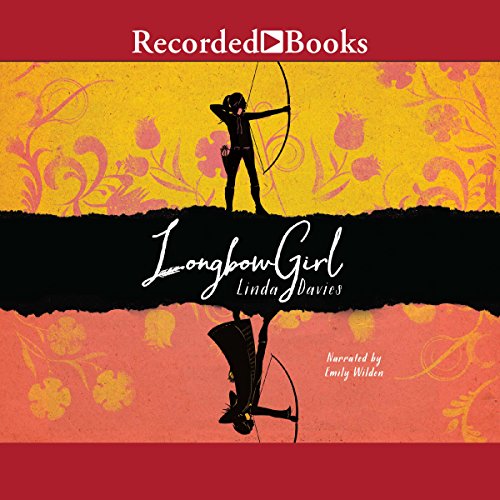 By: Linda Davies
Narrated by: Emily Wilden
Free with a 30-day trial

Merry Owen is desperate for her family to stay on their struggling farm in Wales, in the shadow of the Black Castle owned by the de Courcys, who have been enemies of Merry's family for generations. Skilled in the family tradition of archery, Merry is happiest out riding - but when she finds an overturned tree and a buried chest containing an ancient Welsh text, it leads her into a past filled with treasure, secrets, and untold danger.

In the wilds of the Welsh mountains, the brave and beautiful longbow girl, Merry Owen, discovers a river that takes her back in time to the autocratic kingdom of King Henry VIII. While there she finds she must compete in an archery tournament to save her ancestors' land from being seized by their aristocratic neighbors, the de Courcys. Merry's best friend (and heir to the de Courcy wealth), James de Courcy , follows her back in time, and the two get tangled up in their families' ancient histories. There are forces working against them in both the past and the present. Will they be able to survive their pasts to save their futures?

What listeners say about Longbow Girl

Good Story....difficult to get over narrator accent at the beginning...over all a good book. Thanks!

I loved the book. It was perfect with the accent by the way. It did seen a little slow. I tried speeding it up, but sadly that didn’t work.

A STORY FOR YOUNG AND OLD

I'm told this is a YA novel, but as a 40-something adult I found it immensely entertaining. The protagonist, Merry, is a fifteen-year old Welsh girl who trains as archer (the titular 'Longbow Girl') a family tradition going back centuries. Her best friend is an aristocrat boy named James from a nearby castle, and their families have had issues over land rights since the time of Herny VIII. When an ancient tome is found in an ancient grave in a forest near the boundary between the two estates, both families claim the book, though it is clearly Merry's family that are the rightful owners. How the plot proceeds from there would constitute spoilers, but both family history and the history of the region play a part in a gripping outcome that sees both Merry and James tested about how much the past should influence their futures (both apart and together). Ms. Davies plays with the shadows of the past often and ably, so that the reader, while well aware they are in a modern tale, also feel like they are reading a work of well-researched historical fiction. And there are fantasy elements that come into play for those who love a bit of magic in the narrative, though those are fairly sparse and occur only in one spot as I recall. What makes it all worthwhile is the quality of writing from Ms. Davies, and two of the most likable, well-realized protagonists I've read in a book this year - YA or adult. We immediately gravitate to Merry. She is likable, resourceful, intelligent and yet still portrayed as a youth learning about her world, her past and herself. James is equally well-developed as he fights with his aristocratic family to let his life unfold as he wishes. The mantle of responsibility of their families weighs on each, and they handle it in very different ways. The detail, both in description, and in historical research is also commendable. It does take a bit of getting used to the cadence of the narrator's voice, but once that's done, there's nothing better than to kick back and let Linda Davies and Emily Wilden take you into new worlds. Easily the best YA book I've read since "Where the Red Fern Grows" way back in the day. Recommended for readers of all ages.

The narrators voice was hard to get used to at first, but don't let it keep you from this wonderful story!