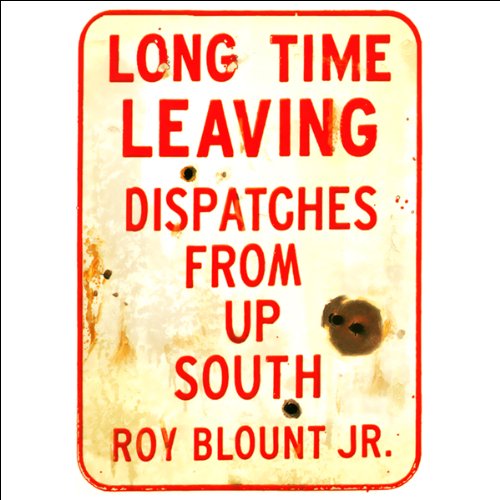 Here's a sly, dry, hilarious collection of essays, his first in more than 10 years, from the writer who, according to The New York Times Book Review, is "in serious contention for the title of America's most cherished humorist".

This time Blount focuses on his own dueling loyalties across the great American divide, North vs. South. Scholarly, raunchy, biting, and affable, ol' Roy takes on topics ranging from chicken fingers to yellow-dog Democrats to Elvis' toes. And he shares experiences: chatting with Ray Charles, rounding up rattlesnakes, watching George and Tammy record, meeting an Okefenokee alligator (also named George, or Georgette), imagining Faulkner's tennis game, and being swept up, sort of, in the filming of Nashville. His yarns, analyses, and flights of fancy transcend all standard shades of Red, Blue, and in between.

Long Time Leaving is a comic ode to American variety and also a droll assault on complacency, North and South - a glorious union of diverse pieces reshaped and expanded into an American classic.

"Roy Blount is so foot-tappingly good that the North and the South will fight to claim him. This book can keep you sane." (Jacqueline Carey)
"Roy Blount is so funny, and he sounds like he's just talking, and the next thing you know he has tossed off an essay as elegant and intricately structured as a birdsong. His ear for American speech is better than anybody's." (Ian Frazier)

Roy Blount has the rare ability to see ordinary things from an angle I've never considered. Always insightful, his unusual perspective also makes him hilarious at times. Did you ever look at the guy in the next car, and see that he was laughing insanely? That guy is me, listening to this book.

Roy Blount also has a very special voice. Hearing his writings spoken by him adds an important dimension that's lacking from the printed page.

This book is great, as all Blount's books are, but I give this version four stars because the unabridged version isn't available. However, what's here is witty and fun, and it will especially amuse you if you are, like me, a liberal Southerner. Roy Blount is wonderful.

Will you listen to this?

This is funny, sophisticated stuff - I listened twice because I wasn’t sure I had really “got” it the first time around - and it was just as good the second time. Some great anecdotes (Southern type) and some gentle remonstrance about certain Northern manners.

His Friends Were Getting Most Concerned

I'll allow that I might could read, work, eat, sleep, sell on eBay, scrutinize Garcia lyrics, walk the dogs, micro-farm, write and do most things a site too much. But there is nary enough time in life to drink in the pure truth that Mr. Blount offers. It's like Ken Kesey said during Dark Star on 10/31/91, &quot;Nobody else reaches across the distance and puts their hand on your shoulder and talks to you about this S. That's what the Dead have been doing for a long time, reaching across. When you guys played Broken Down Palace at that gig, I knew, S, this is the Grateful Dead telling me about my son. It's a big a time as it gets. And old Bill knew it, you know he knew it.&quot; I work with a young man who has a symptom I am quite fond of and wish more people had called alogia. One time a judge asked him why he never talks. He thought for a moment, looked sideways at the judge and then mumbled, &quot;Because mostly what people say is *bullshot*&quot; (Amazon will sell you books entitled 12 inches: A Secret Baby Dark Romance; however they will not allow reviews to have naughty words in them). Thankfully there are still a few real people left who are reaching across.

Roy Blount Jr. covers all the stereo-typical bases that have been applied to Southerns over the years. He does so with, of course, humor, and also jabs back at those people who are also themselves stereotypes of other sorts. His stories of the South and of liberals, conservatives and Northerners and the differences between made me laugh and shake my head in recognition and agreement as to the ignorance of people about their own fellow citizens.