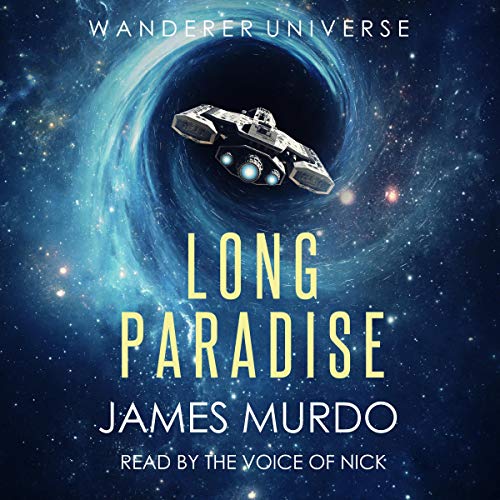 By: James Murdo
Narrated by: The Voice of Nick
Try for $0.00

The Outer Layer is an enigma to its residents. Representatives from countless races and civilizations wander the many territories hoping to unlock the secrets and progress further into its depths.

An anomaly has been detected in space by an artefact from an extinct civilization. Ciqalo, a machine intelligence from the Wanderer civilization, is tasked with investigating and weaponizing the anomaly for a galactic war.

Tolren, playmate to the heirs of a powerful Roranian family, becomes a hunted fugitive. He finds himself thrust into a dangerous adventure aboard a structure in space that defies understanding. What’s more, he’s not alone. Seremend, a fellow Roranian, has also been ensnared.

Why have they all been chosen?

A stand-alone novel from the Wanderer Universe.

Cerebral sci-fi with an emphasis on the "sci". If you enjoy hard sci-fi, complex space opera, and authors such as Iain M. Banks, Alastair Reynolds, and Dan Simmons, then this is for you.

What listeners say about Long Paradise

I definitely enjoyed this story, read by a talented narrator. You actually felt that you were going to space. The characters felt realistic.

This is my first experience with James Murdo's work. I can't help but feel that this story would have made a greater impact on me if I had been more knowledgeable about the Wanderer Universe series. I was amazed at the complexity and inventiveness that went into the world building described in this tale; however, I felt little connection with the major characters. The narration by The Voice of Nick was fine. I was given a free copy of the audiobook and I have voluntarily left this review.

This is an amazing mind twisting stand alone story in the Wanderer universe. Beautifully narrated and interpreted by The Voice of Nick. I really enjoyed the way the threads of this story came together. The protagonists looking to understand why they were chosen, the different species each on their own path, the copies searching for The Original, and the terrifying Tracker all intertwined and internally consistent. Who is friend and who is foe? If you enjoy Ian M Banks Culture series, I'm sure you will love this story.

This has some excellent characters but at first I had no idea how the subplots would fit together. I didn't even know if they would ever come together or with separate realities. This is Science Fiction where anything can happen. So it is more like an intellectual, engaging mystery where you just have to find out how it all fits. I had to keep listening and could not stop listening until the very end. The narrator is great. Very interesting read. I got this free in exchange for this honest review. Try it. It is unlike many other books in this genre.

A masterpiece made even better on audio

When I originally read this book in 2019, I loved it. It's a book you have to really focus on. No distractions if you truly want to be absorbed in the story. I was blessed to come upon this audiobook, though, and having it being narrated opened up a whole new vision of the story that I had not realized I was losing out on by just reading it. Listening to the story helped my mind envision things much more clearly. Even parts that I thought I had understood, became crystal clear and I would rewind to hear it again. The narrator was perfect in bringing clarity to the story and life to each character. James Murdo has a fascinating imagination! Thank you, sir, for helping to expand my mind. I'm in awe!

An enjoyable and interesting hard science fiction story. The writing is excellent and the story complex, it took me a while to get my head around it but in the end everything comes together to a satisfactory conclusion. Excellent narration make this an enjoyable listening experience.

Sci-fi space opera to blow you away

I loved this story. Time travel, technolgy beyond our current comprehension makes this an intriguing tale to listen to. I will need to listen to it again a few times as it is a complex plot, but has led me to buy the book and others that James Munro has done. I won't spoil anything, you need to listen for yourself. Perfect for a sci-fi lover like myself. Thank you James!

The narrator expertly brings you into the world of James Murdo, I felt like I was there along with the characters. He cleverly tailors his voices to give life to each character, narration flow is steady throughout. Some narrators can come across as boring for me, however, The Voice Of Nick keeps his flow throughout and to me, sounds like he enjoys reading it out to us as much as we enjoy listening or reading for ourselves. Look forward to more from the narrator.