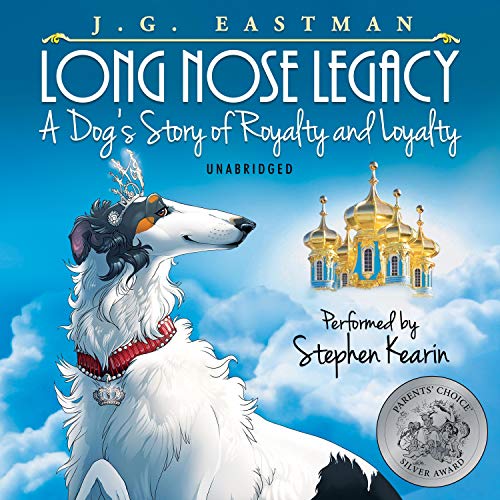 Gracie, a royal snobby show dog, expects her noble puppies to follow in her pawprints of being a pampered princess. Daughter Carnegie has inherited Gracie’s aristocratic attitude and assumes she’ll be pick of the litter. When the coveted title goes to her humble but perfect sister, Madison, she is resentful and scoffs at being a silly show dog.

Carnegie sets her sights on becoming a famous “woof hunter” and living as royalty in the Imperial Palace. The only tiny problem is how to get from her home in New York, all the way to Russia on her own.

Madison is torn by loyalty to her owner, Garnett - who expects her to carry on their kennel’s legacy of Grand Champion show dogs - to Anastasia, the young girl who holds her heart - and to her scheming sister, Carnegie, who needs her to carry out her royalty-obsessed plans.

Opening and closing music by Derek Feichter and Brandon Feichter.

The illustration of Carnegie on the audiobook cover is by Chanel "Dezzoi" Scott.

Highly recommended as a unique listening experience. The author has created fully relatable canine characters, each with richly drawn, distinct personalities. Both humorous and poignant, the story is moved by two sister Russian Wolfhounds, Madison and Carnegie, each one very different in her pretenses and aspirations, each expressing varying degrees of pride, optimism, sincerity, and very relatable vulnerabilities.

Listening to the narrator drawing these endearing qualities out with skilled and loving nuance is something to savor. I’m nearly 60, and my wife, 13 year old daughter, and 7 year old son found listening to this book together a genuine pleasure. There’s a real art to appealing to such a wide age range, a bit like the best Pixar films, and Eastman’s book very much appeals.

Very delightful story about the importance of family (as told through the eyes of two Borzoi sisters). The writing is very descriptive, making it easy to “see” the story. The narration is excellent as well. Kearin’s very versatile acting skills bring the story to life, make it easy to distinguish between all the varied characters and giving each their own distinct and unique voice.

I loved this entertaining and moving book. In this audio version, all of the wonderful characters created by the author J. G. Eastman, both human and animal, are vividly brought to life by the amazing vocal dexterity of Stephen Kearin. Highly recommended!

So happy for this book

It is a great story with a lot of funny and heartfelt moments. Must read/listen for any borzoi owner or lover.
Audiobook is really well narrated.
It kept me interested and looking forward to hearing the next chapter the whole time and I borrowed few lines from the story to use with our puppy girl because she is a “woof hound” as well ;) when I have kids, this will definitely be number one book to read to them ☺️