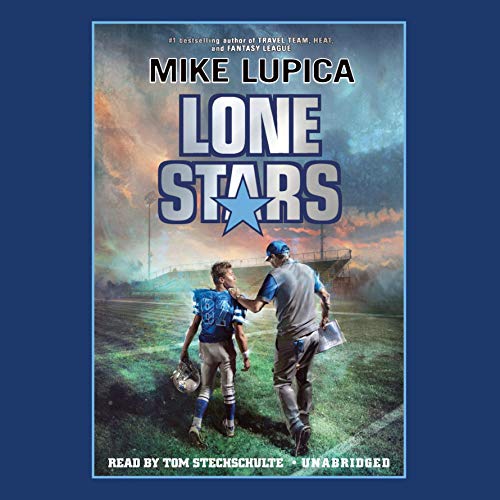 By: Mike Lupica
Narrated by: Tom Stechschulte
Try for $0.00

An uplifting story about role models, football, and tackling fear set in the heart of Friday Night Lights country - from the best-selling author of Heat, Travel Team, and Fantasy League.

Clay is a quarterback's dream. When he zips across the field, arms outstretched, waiting for the ball to sail into his hands, there's no denying him the catch. Like most Texans, Clay is never more at home than when playing football. And his coach, a former star player for the Dallas Cowboys, is just like a second father.

But as the football season kicks off, Clay begins to notice some odd behavior from his coach - lapses in his memory and strange mood swings. The conclusion is painful, but obvious: Coach Cooper is showing side effects of the many concussions he sustained during his playing days. As Clay's season wears on, it becomes clear that the real victory will be to help his coach walk onto that famous star logo in the middle of Cowboys Field one last time - during a Thanksgiving Day ceremony honoring him and his former Super Bowl-winning teammates.

In Lone Stars, number-one New York Times best seller Mike Lupica demonstrates once again that there is no children's sports novelist today who can match his ability to weave a story of vivid sports action and heartfelt emotion. A touching story that proves life is bigger than a game.

"Lupica has crafted another fine sports story for the middle school reader." (VOYA)

"There is plenty of great football action to keep the sports enthusiasts engaged, and the information about concussive injury is easily understood and applied. This is an entertaining read that also imparts an important message." (School Library Connection)

"Young readers, no matter their level of interest in the game, will be drawn in by this touching, timely story." (Booklist)

What listeners say about Lone Stars

For pretense, I’m a 13 year old teen boy. The book was great because I have the attention span of a prune so I can’t sit down to read. The only bad thing is I feel the story didn’t really go into what was wrong with his head.

If you like football as much as me you could sit down and listen to this beginning to end. Mike Lupica is my favorite author