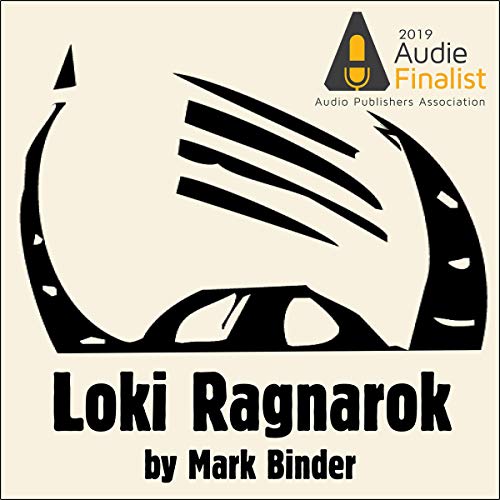 Who says Thor and Odin are the good guys? Loki Ragnarok is a story of betrayal, madness, and murder based on the Norse myth of the end of the world.

In the shadow of prophecy, Loki's family is torn asunder, leading to betrayal, torture, madness, and revenge.

Loki Ragnarok is not a Marvel spin-off. Based on the two Norse epics, the Prose Edda and the Poetic Edda, it flips the original myths on their heads. Thor and especially Odin are not the heroes they are portrayed in popular culture. Instead, like a criminal on trial, Loki pleads his case, justifying everything.

Written by Mark Binder, an award-winning author and performing storyteller, Loki Ragnarok is a brief epic, a dynamic blend of prose and poetry. The language in this telling saunters between elevated and crass. This is not a story for children.

"Mark Binder — Providence-based author, storyteller, and sometime political candidate — returns with a well-told tale of the Norse gods. This one is told not from the point of view of the heroic Thor or Odin, but through the eyes of Loki, the trickster. Not really a god but rather a giant, Loki is always the outsider in Asgard, the gods’ land. And as he tells of their lies and manipulations, it’s clear why he likes it that way. Here are the gods — and Loki — pretending to deal in good faith with a man who offers to repair the wall around Asgard, but secretly plotting to cheat and kill him. (Of course, the builder, it turns out, has not been dealing honestly, either.) Here are the gods persecuting Loki’s children — a wolf-boy, a snake-boy, and a daughter aptly named Hel — and causing the death of their mother, Loki’s lover. Here is Loki, arranging the murder of one of the most beloved gods and taunting others for their sexual inadequacies. (Thor’s hammer, it turns out, is less impressive than he’d like people to think.) And here, at last, is the all-out battle called Ragnarok, in which — spoiler alert — everyone dies. As Binder says in his introduction, this is not for children. But the stories are well-told, both in their writing — Binder adapted them from the Norse poetic and prose sagas called the Edda — and in their performance. Binder’s voice swoops and soars, now angry, now gleeful and now mocking, as Loki tells these stories of the gods run amok." -- Alan Rosenberg, The Providence Journal

What listeners say about Loki Ragnarok

I’m quite disappointed. I may have enjoyed it a bit more if the author/ narrator knew how to pronounce the Nordic names... and if he didn’t over do the “silly” voice. It’s a nice concept, but severely lacking in actual story telling.

Good general overlay of the Norse Mythos. I enjoyed the narrators enthusiasm and tone...but I was immediately ripped out of the story when he continuously mispronounced words. Specifically Jotun, Mjolnir, and Jörmungandr.