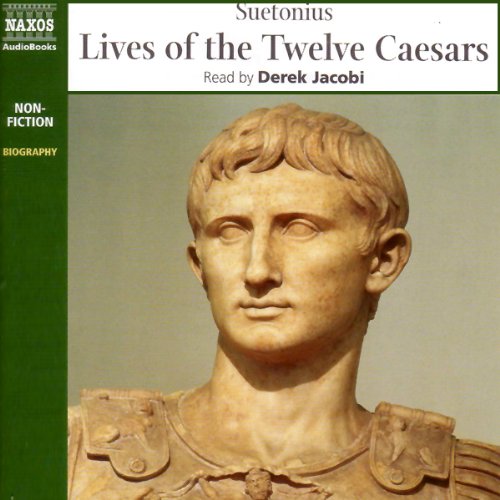 Lives of the Twelve Caesars

By: Suetonius
Narrated by: Derek Jacobi
Try for $0.00

Suetonius wrote his Lives of the Twelve Caesars in the reign of Vespasian around 70AD. He chronicled the extraordinary careers of Julius, Augustus, Tiberius, Caligula, Claudius, Nero, Vespasian, and Domitian and the rest in technicolour terms. They presented some high and low times at the heart of the Roman Empire. The accounts provide us with perspicacious insights into the men as much as their reigns, and it was from Suetoniaus that subsequent writers such as Robert Graves drew so much of their material.

What listeners say about Lives of the Twelve Caesars

Jacobi reads beautifully (he played Claudius, one of the Caesars in question), but Naxos, the publisher, seems strangely coy about the translator--not even in its catalog does it reveal whose English version Jacobi is reading. It's certainly not the celebrated Robert Graves translation (for that go to the Audio Connoisseurs edition) but a far looser one, and, of course, heavily abridged. Information about the translator would seem a basic courtesy to the buyer. This buyer, at least, is disappointed by the lack of it.

This is the 7 hour, children's version. Do not purchase. Buy the 14 hour version instead.

It felt like I was a contemporary roman listening to a wise and educated man tell the stories of the Caesars.

Derek Jacobi knocks it out of the Park

This is the finest reading of a Roman primary resource (book) I've ever heard. Derek Jacobi makes Seutonius come alive, almost like you are talking with Seutonius. Here his outstanding work in the BBC series "I, Claudius" really pays off. He knows the material inside and out. I marveled at his performance on this audio book.

Anyone who knows Roman history knows there are flaws with Seutonius; some of the information here is true; some is court gossip, rumor or innuendo. However, it is an important work, warts and all.

If you love Roman history, this is worth a try. There are so many wild, interesting and somewhat crazy anecdotes here. And some real History.

Absurd book for children. A book about real live monsters. Men who universally were murderers. Adult only, and therefore useless because it has been edited (shortened)
Stay away. It could have been great.

I found myself fixated on the reader's pronounciation rather than the book itself. Think Pontius Pilate/Michael Palin from the movie "Life of Brian", because I do whenever I listen to it.

Perhaps the choice of reader was intentional.

A sadly wasted opportunity. Unfortunately this audiobook is very abridged. Some unusual and odd choices were also made in Latin pronunciations, which can be off putting or confusing. The translation of the text itself (done by person/s unknown and difficult to discover) is strange and archaic, occasionally making the text difficult to understand (even for a classics scholar!). This includes the bizarre miss-use of technical terms, to give just one example, the term ‘poignard’ is often repeated (a fairly obscure term for a specific medieval type of dagger) instead of using the generic simple translation of ‘dagger’ or a specific correct term like the Latin ‘pugio’.

The fact that, despite all this, I still think it deserves 4 stars it testament to both the original text of Suetonius and the fantastic narrating of the great Sir Derek Jacobi, but could have been so much better, so easily!

Narrated with great skill by Derek Jacobi who brings ancient history up to date and very much to life. Seutonius is a skilled eloquent writer who makes history enjoyable. If you know nothing of the early roman emperors this will go a long way to enlighten you. I would recommend this book to all readers aged 16+

All the surviving scandal

I don’t think this is really an audiobook for children, in spite of the annoyingly perky American “kid” who introduces the narration! All the stuff Robert Graves thought too racy for the middle-class British readership of his time- the BBC adaptation would have had to be shown very late at night!
Sadly, some of the text has not survived (unless it turns up in some obscure monastic library, hidden inside a volume of Augustine or Jerome!)

What a classic story from ancient Rome. Been meaning to read this for a while and it was perfect