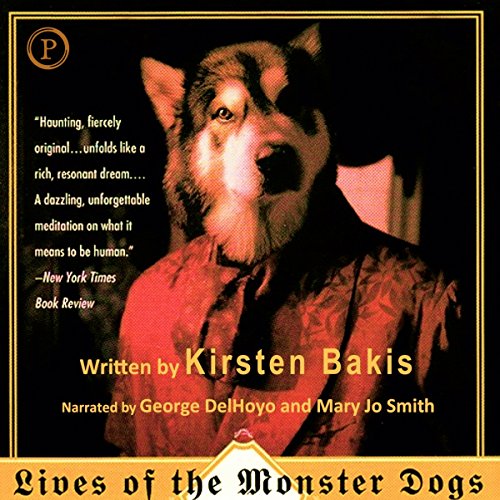 Lives of the Monster Dogs

In the year 2008, a Malamute arrives in New York City, followed by a pack of German Shepherds, Dobermans, and Great Danes, all dressed in grand old Prussian style. They become the toast of Manhattan - Monster Dogs. But who, or what, are they really? Outfitted with voice boxes and prosthetic arms, the dogs are the result of an experiment begun years ago in a tiny Canadian village. But their creators did not anticipate that these decadent dogs would be threatened by a strange, incurable illness. In Lives of the Monster Dogs, Kirsten Bakis has created a haunting parable for our times.
©1997 by Kristen Bakis (P)1997 by Audio Literature
Classics Literary Fiction Contemporary
Show more Show less

What listeners say about Lives of the Monster Dogs

What did you love best about Lives of the Monster Dogs?

The story is great. The narrators really allows the listener to really imagine what is going on. Having two different narrators really worked out well with this story. I do not remember how this book became part of my library, since it was purchased in 01. After re-listening to it, I would like to see more stories from Kirsten Bakis.

The story is like a dog version of The Secret of NIMH.

Not a fantastic story. It would make a great movie with a little more action. Imagine a story where Artist William Wegman (the photographer who dresses Weimeraners) meets Dr. Frankenstein. It's a great idea, great narration, but I think there could have been more done with the story. Sound quality was also poor.

I like dogs, and this book plays them out in a complex way. The story moves along at a good pace, and the readers' voices (1 male, 1 female) are very good to the parts. Although the mechanics of a humanoid canine are quite awkward, it's past to look past that into the story. If you like German history and large breed dogs, you'll like this story. I was bummed in the missing Rottweiler, a must-have German breed, and my favorite... and that the story was too short. At least, I don't recall hearing anything about rotties.

I loved the fantasy of the story. Very good sci fi! The only thing that disappointed me about this book was that one of people doing the voice of one of the characters was not very good. It brought what otherwise would have been a fantastic story down a little I hate to say. I think I would have been better off reading the actual paperback myself on the couch with a cup of hot chocolate. I could have imagined the voices in my head a little better than the poor reading ... it was a distraction to the story. Still, I did enjoy it.

really well written, worth a listen.