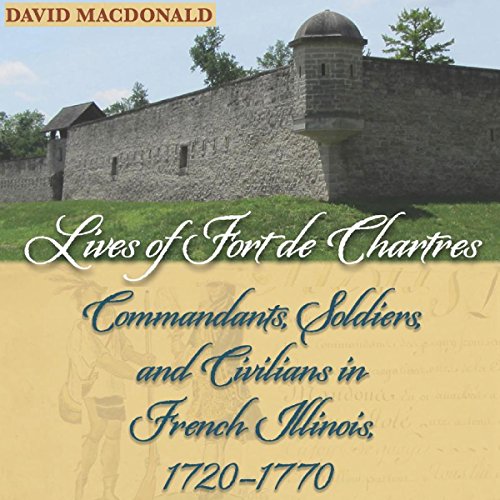 By: David MacDonald
Narrated by: Todd Curless
Try for $0.00

In the first section, MacDonald explores the fascinating history of French Illinois and the role of Fort de Chartres in this history, focusing on native peoples, settlers, slaves, soldiers, villages, trade routes, military administration, and the decline of French rule in Illinois. The second section profiles the fort's 12 distinctive and often colorful commandants, who also served as administrative heads of French Illinois. These men's strong personalities served them well when dealing simultaneously with troops, civilians, and Indians and their multifaceted cultures. In the third section, MacDonald presents 10 thought-provoking biographies of people whose lives intersected with Fort de Chartres in various ways, from a Kaskaskia Indian woman known as "the Mother of French Illinois" to an ill-fated chicken thief and a European aristocrat. Subjects treated in the book include French-Native American relations, the fur trade, early Illinois agriculture, and tensions among different religious orders. Both informative and entertaining, Lives of Fort de Chartres contributes to a more complete understanding of the French colonial experience in the Midwest.

What listeners say about Lives of Fort de Chartres