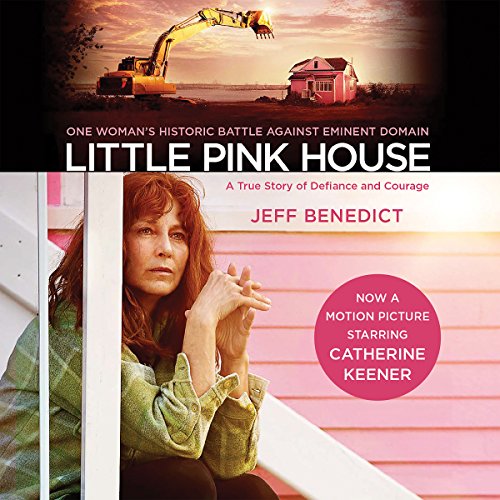 By: Jeff Benedict
Narrated by: Maggi-Meg Reed
Try for $0.00

In Little Pink House, award-winning investigative journalist Jeff Benedict takes us behind the scenes of this case - indeed, Suzette Kelo speaks for the first time about all the details of this inspirational true story as one woman led the charge to take on corporate America to save her home.

Suzette Kelo was just trying to rebuild her life when she purchased a falling down Victorian house perched on the waterfront in New London, CT. The house wasn't particularly fancy, but with lots of hard work Suzette was able to turn it into a home that was important to her, a home that represented her new found independence.

Little did she know that the City of New London, desperate to revive its flailing economy, wanted to raze her house and the others like it that sat along the waterfront in order to win a lucrative Pfizer pharmaceutical contract that would bring new business into the city. Kelo and f14 neighbors flat out refused to sell, so the city decided to exercise its power of eminent domain to condemn their homes, launching one of the most extraordinary legal cases of our time, a case that ultimately reached the United States Supreme Court.

"Catherine Keener nails the combination of anger, grace, and attitude that made Susette Kelo a nationally known crusader." (Deadline Hollywood)

Is this China? Almost.

Great reader, and superb story. If only it were fiction. I had vague recollections of the supreme court ruling this book covers, and I remember being really upset about it. It reminded me of what the Chinese government was doing - taking peoples' homes and putting big malls up in their place. And that's what the US Supreme Court approved of! This story is much more intense, and more disturbing than that. But it is also an education well worth attaining. Highly recommended.

A true story that reads like a good novel

An interview of Susette Kelo on the Today Show prompted me to read this book. I wish I had half her gumption and dedication. Many thanks to her and her fellow neighbors for elevating property rights taking to a public level.