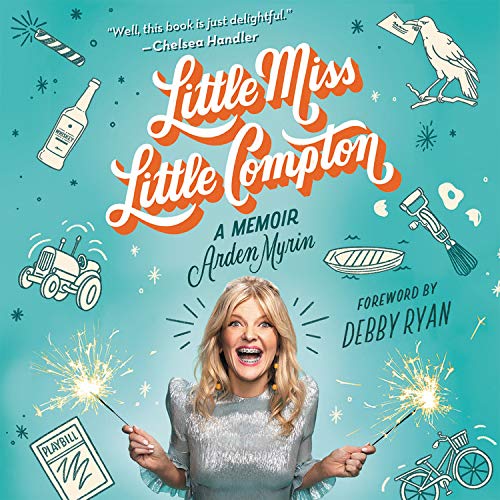 Comedian and actress Arden Myrin delivers a hilarious and heartfelt memoir about navigating adulthood and her rise on the comedy scene despite an unconventional upbringing.

Arden Myrin is the product of not one, but two hasty decisions. Her paternal grandparents ran off and got married 24 hours after they met. Arden's parents did one better - they married on a dare. Growing up in Arden's family, her dad ate nothing but sheet cake, while her mom was busy teaching a Cub Scout troop how to put on a Broadway musical. Oh, and she grew up in a small farm town called Little Compton, Rhode Island. Human population: 3,518. Cow population: 278. General store: one. Stop lights: zero.

At 19, Arden packed her bags with stars in her eyes and landed at ImprovOlympic in Chicago, where for the first time in her life she felt like she finally made sense. After drinking in as much comedy experience (and Sea Breezes) as she could, Arden got her big break when she was cast on an NBC sitcom. She moved to Los Angeles, knowing no one, and quickly realized she had no clue how to be a fully grown human adult on her own.

How do you date someone and not ruin it? How do you interact with people if you have a teeny bit of social anxiety? How do you stand up for yourself if you're a people pleaser? And most of all, how do you start to believe that you are enough?

From small-town Rhode Island to accidentally kicking Courteney Cox in the face on a soundstage in Hollywood, Arden's hilarious, inspiring, and honest story shows listeners how one totally unconventional upbringing might be the very thing one needs to thrive, all while showing up as your most outrageous, authentic self. Shout out to Little Compton! Woot woot!

"Arden Myrin is one of the funniest people I know. Smart and charming and small. If you know how to read, read this book. If you don't know how to read, then you should have stopped trying a few sentences ago." (Zach Galifianakis)

"Lucille Ball meets David Sedaris and travels to Little Compton, Rhode Island. Arden Myrin laughs at herself first and makes you want to do the same! You won't find a prettier, smarter, wittier CLOWN ever. JUMP in and read about the circus Arden Myrin grew up with. FUNNY, FUNNY, and even FUNNIER!" (Connie Shulman (Orange Is the New Black, Doug))

"I do not use this word lightly when describing somebody. In fact, it is a word I use so infrequently that I don't think I have ever used it before. So, when I say Arden Myrin is a 'wack-a-doodle' you know I mean business. Arden's book is funny in an off-kilter, head-cocking way. It is the kind of funny that makes you laugh, then think about why you are laughing, then laugh even harder as your reward for having figured out that what she has said is even funnier below the surface than it is above. She is either cheerfully malevolent or malevolently cheerful; I cannot figure out which. Perhaps it is both. That would make sense, since keeping people on their toes while making them laugh and fall in love a little bit are all qualities that make the wack-a-doodle so deadly." (Michael Ian Black, author of You're Not Doing It Right: Tales of Marriage, Sex, Death, and Other Humiliations)

I bought both the print and audio version because I couldn’t pass up hearing Arden read her own story.

I’m perplexed by any review that claims she used her town for fodder. All you need to do is actually read the book to see Arden is clearly proud to be from LC and holds it and its inhabitants in high regard.

Arden has stories you cannot miss. She’s led a unique life, and leads us through all the highs and lows with poise, charm, and humor.

This book was so good & it was very enjoyable to listen to the author tell her story. The stories about the quirky town of Little Compton make me want to visit even more than knowing that this is where Hannah B & Tyler C had their awesome lobster fishing date! Little Miss Little Compton is a guidebook for how to follow your dreams & never give up & also for how to navigate life with & grieving for a tricky parent. I laughed at Arden's antics as a child & an adult, & I cried over the beauty of her relationship with her mother & the depth of that loss. I would recommend this book to any fan of Arden's & to anyone who may be currently stuck on grief island looking for a life raft!

Why did I get this book? The author/narrator has the most ANNOYING voice ever! I could only bear 5 minutes of it. Not funny at all.

I read this book first. The audiobook is even more spectacular. You’ll laugh, you’ll cry and will just be enamored with Arden.

I loved this book and the read by the author. 100% recommend. I find I’m asking myself, “Would a drip do this?” Copyright all appropriate catchphrases ASAP, Ms. Myrin.

Buy the book for the story about game night gone wrong at her high school friend’s house and stay for everything else.

I loved this book so much. it was funny and relatable and such an easy read, in the best way! It felt like hanging out with a friend.

I give you my final rose

I absolutely love love loved listening to this book and the story of Arden’s life.

I’m a big fan of Arden and WYATR. It was a beautifully written book about her life adventures (and misadventures) that took her from childhood to where she is now. She really opened up about some heavy things and it was sprinkled with the silliness of the Arden we love. Great read!

As a fan if Arden's podcast, "Will You Accept This Rose?," I wanted to listen to this book instead of read it. I was not disappointed. Mostly fun with a tinge of sadness (Grief Island is real) this was a very fun listen.

So warm, funny, and real

Arden is always a joy, and her hilarious viewpoint shines through in the many quirky life stories. Hearing her tell the story in her own voice is the absolute best way to take this rollercoaster of sweet emotions.