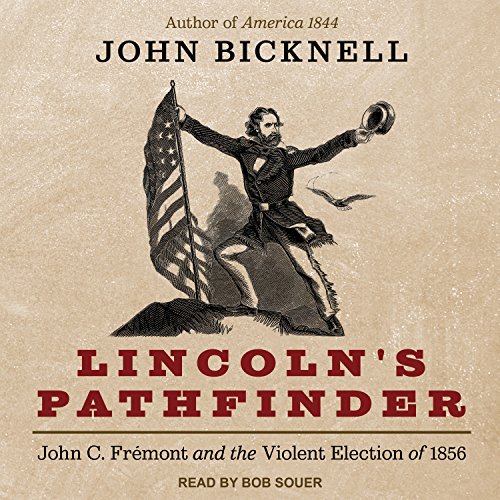 By: John Bicknell
Narrated by: Bob Souer
Try for $0.00

The 1856 presidential race was the most violent peacetime election in American history. War between proslavery and antislavery settlers raged in Kansas, a congressman shot an Irish immigrant at a Washington hotel, and another congressman beat a US senator senseless on the floor of the Senate.

But amid all the violence, the campaign of the new Republican Party, headed by famed explorer John C. Fremont, offered a ray of hope: a major party dedicated to limiting the spread of slavery. For the first time, women and African Americans actively engaged in a presidential contest, and the candidate's wife, Jessie Benton Fremont, played a central role in both planning and executing strategy and was a public face of the campaign. Even enslaved blacks in the South took hope from Fremont's crusade.

The 1856 campaign was also run against the backdrop of a country on the move, with settlers continuing to spread westward facing unimagined horrors, a terrible natural disaster that took hundreds of lives in the South, and one of the most famous Supreme Court cases in history, which set the stage for the Civil War. Fremont lost, but his strong showing in the North proved that a sectional party could win a national election, blazing the trail for Abraham Lincoln's victory four years later.

"Bob Souer offers an engaging reading of this audiobook.... This often overlooked period of U.S. history is brought to life in Bicknell's book, and Souer translates it to audio effectively." (AudioFile)

What listeners say about Lincoln's Pathfinder

The author states this 1856 presidential election year was the most violent in our history. The hostility between the proslavery and antislavery was becoming violent. The Kansas-Nebraska act erupted into a what is called bleeding Kansas. A congressman shot an Irish immigrant at a Washington Hotel. Another Senator beat a fellow senator senseless on the floor of the Senate.

General Fremont was a very popular candidate. For the first time, his wife played a central role in the campaign. Usually the wife stayed in the background even if they were active in their husband’s campaign. The violence was building in the Dred Scott v Sandford case and the Supreme Court came out with its verdict in 1857. As the violence was building and in spite of Fremont’s popularity, the votes started to turn. There was widespread feeling that things were falling apart and the voters turned to who they thought would be the safer choice, James Buchanan. Recently, I read a biography of Buchanan and it was stated he was the worst president we have had to date.

The book is well written and researched. The book is easy to read and provides a lot of details about the 1856 election. Bicknell does an excellent job explaining how events got elevated into political symbols. My only complaint is Bicknell did not have much detail about Fremont even thought he was the key figure in the book. Bicknell calls it a year of passion and partisanship.

The book is ten and a half hours long. Bob Souer does a good job narrating the book. Souer is voice over artist and audiobook narrator.

i did learn something about how politics was done in the time before the civil war.