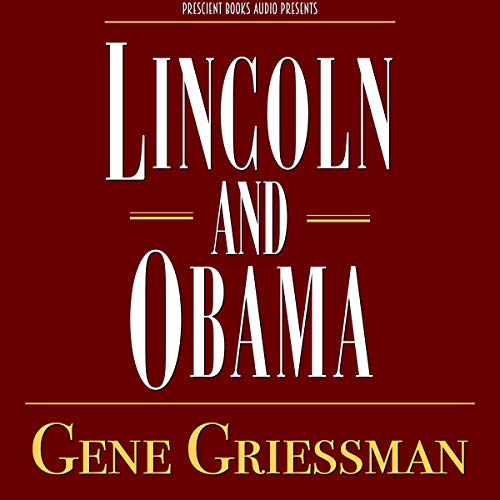 Love President Obama or hate him, you will be surprised to learn how many parallels there are between Lincoln, the 16th president, and Obama, the 44th president. Some similarities are obvious and predictable, but others are fascinating, uncanny, and mysterious. This is the fascinating account of two obscure Illinois lawyer-politicians separated by 150 years who against all odds came to the White House. This is an American story about success and failure, ambition and hatred, politics and passion. It's even more remarkable to hear how much Lincoln and Obama had in common as we live through a presidency that couldn't be more different.

Gene Griessman is a thought leader celebrated around the world for his audiobooks, training films, and memorable presentations. As an actor and playwright, he has performed at Ford’s Theater, the Georgia Dome before 25,000, the Lincoln Memorial, and aboard the famed carrier the USS Abraham Lincoln. He has conducted exclusive interviews on TV and in print with American presidents, actors, sports stars, and business leaders. He has won numerous awards including the Benjamin Franklin Award. He often appears on television and radio, and his award-winning productions have aired nationally.

What listeners say about Lincoln and Obama

If you're looking for one of those books that makes odd comparisons between two Presidents, this isn't it. The promise of the book is that it compares similarities between Lincoln and Obama. Although some of those facts are a little thin that doesn't mean you should avoid this book. I enjoyed it and, it particular, Gene Griessman's narration of his own work.

loved the narrator! interesting comparison It really made me think! the writer obviously has passion on the topic and his enthusiasm really rubbed off on me! made me understand President Lincoln more.....it is a good read!

Spellbing and Riveting - Without Exaggeration

The first test for me to buy any Audible book is whether the narrator is boring or not. I don't have time to listen to someone putting me to sleep. My attention span is very short. Even if it's best ever written. Well, as soon as I listened to the sample of this book, I was sold. The best part is, the book is read by the author.

Frankly, I lost track of time. Three hours later, I was still riveted. I have NEVER listened to an audiobook for that long in one sitting. It felt like listening to a best friend you admire and respect telling you stories about what makes Obama and Lincoln two amazing and transformational human beings.

I thought I knew a lot about Obama until I started listening to this book. I felt like someone handed me a pair of 3D glasses to look into Obama's multidimensional life as well as Lincoln. Really spectacular! I will definitely buy a physical copy of the book on Amazon for my library. It's a classic.

Author and professional speaker, Gene Greissman had me from the first chapter. He opens with a deeply personal story of his life as a boy in the south and moves us through a vibrant history lesson of two great men. The author is a fabulous storyteller and, like great teachers, makes the past come alive.

I felt like Lincoln was in the room and laughed at loud at his brilliant wit. And the author's diligent research reveals intriguing surprises about Obama.

I am going to gift this wonderful book to my friends and colleagues who will be drawn into this brilliant juxtaposition of two great figures.

As a professional speaker, I am always looking for authors that are thought leaders, those who give me a different perspective on ordinary events. Dr. Griessman exceeded my expectations in Lincoln and Obama. Recognizing the patterns within history can give all of us better personal strategies to thrive in the extraordinary and complex world we live in today. Lincoln and Obama are two of my favorite presidents, so the title intrigued me. What I learned was even more powerful. If you are looking for a book that will challenge you to see history in a different way and inspire you to make an impact today, this book is a must read.

Fascinating! A new perspective on 2 presidents

I previously worked in the West Wing and then as speechwriter to the CEO of Coca-Cola. Today, I coach executives on their message and delivery. I share this because I approached this audio book having some knowledge of both White House politics and effective communication. This book was fascinating and follows the counsel I teach my clients.

Listening to the author is like having a fireside chat with your favorite uncle . . . if your uncle was a best-selling author, student of Obama and Lincoln scholar.

I was most surprised between the historical similarities between the two presidents and what we can learn from them.
Highly recommended!

A tale of two giants

I just finished listening to “Lincoln and Obama”, a book that every lover of History and Politics should read or listen to, the elegance and refinement of the style, the references and anecdotes are beyond excellent..
A parallel not only between the two men but between two eras that in spite of the distance in time the people, their passions, their beliefs and emotions have not changed...
This book is a journey in the meanders of politics and human psyche..
A wonderful saga... A must read

I recently purchased Lincoln and Obama by Gene Griessman and listened to it over several days while driving around Atlanta. It has been a breath of fresh air to me. Listening to all the similarities between my two favorite presidents has been intriguing. Seeing battles, they had to fight and strategies they both used strengthened my understanding of both men and the jobs they accomplished when they were in the Oval Office. Another thing I loved about this audible book is I was able to hear the compelling stories read in the beautiful baritone voice of the author, Gene Griessman. Griessman, known around the world for his one-person show as Lincoln is a fantastic narrator. Hearing any other voice doing the narrating would have been a disappointment. I give this audible book two thumbs up. It was fascinating and enjoyable.